Biological postcards letter from Finnmark and the Barents Sea

Cruise diary: This newsletter has been written by all the biologists onboard the G.O.Sars at the last biogy and geology cruise in 2014. Each biologist has picked her favourite photo from the work on this cruise, and they have written a story for that picture.  There are many different voices here, this reflects both the diversity we see in the benthic communities – and the diversity among the biologists. 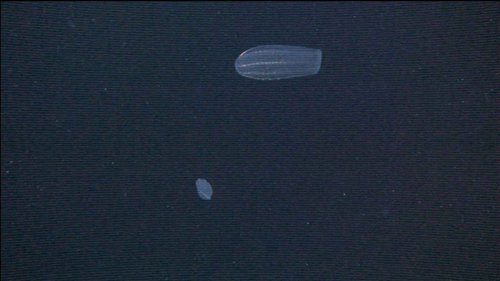 Everyone is in their positions, and we are ready for the videorig to land. No human has yet set eyes upon what we are about to see. Darkness surrounds our equipment on all fronts, and the only lit up area is a few meters just ahead. The vastness beyond this minuscule spot will continue to remain a mystery. This is uncharted territory, and we are about to put a fraction of it on the map. We are exploring the final frontier.

We don’t know what kind of life forms we will find here. Will they have tentacles instead of arms? Will they even have eyes, and if so, how do they perceive this ever-dark, cold world of theirs? How will they react to our presence…

The truth is, we are men and women of science, and we have made predictions about what we will find in this unexplored area. But our models and predictions are all about to be put to the test. Anything can happen; the universe has never been in short supply of surprises. We hope for something magnificent, and we know that undiscovered, magnificent things lie all around us. Maybe one of those will cross our path today. Maybe today is the day.

So we settle in our chairs, we ready our measuring instruments, and in a steady voice, we give the order. A brief seconds later, we hear the confirmation that our mission 1493 has begun.

We shout through the corridor to the winch-driver sitting next door in the room with a view to the sea.
Whaaat?
LAAAAAND!!!!!
The Campod*-legs hit the seafloor and the mud whirls up. It is like looking out of an airplane flying slow motion though a thick layer of cumulus-clouds.  With finely grained and light ”sandy mud” as the bottom type it takes some minutes before we can peer though the clouds. Small glimpses down to apparently lifeless, grey mud.
Then a shadow appears in the gleaming lights from the campod; a creature with legs seemingly too long and thin for his own good. ”Ooooh! The rocker!!! Look how he sways up and down as he stalks away!” Having been given away by his own shadow all of us can now see the Munnopsidae**, even when the colour is exactly that of the sediments. We watch him bounce along thinking that if he goes off now he will reach the end of the world.
Which is just what he does. In one giant leap he takes off into the void and floats along, the long legs spread out like an umbrella that didn’t survive the meeting with a storm.
The reactions from all present in the room is spontaneous. Cheers can be heard far into the rest of our vessel.
We scan the area that is lit up by our lights. Sediment types and Latin names of animals are poured over the logger while we film everything. Then we get ready to do like the Munnopsidae – take off and fly.
700 meters later and we are at the end of our transect.
“Permission to land!”
LAND? 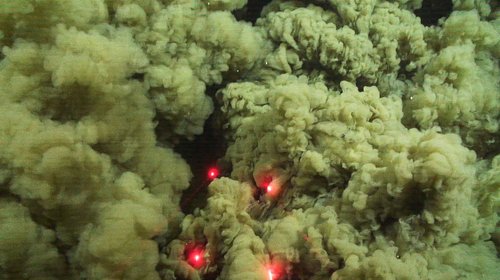 A swarm of mosquitos in Finnmarksvidda? No – Krill in the Barents Sea

During our cruise we have been filming a lot of transects along the seafloor in the Barents Sea. Sediments are whirled up into the water when the video-rig is put down on the seafloor, and we often have to wait for some time before we see enough of the surrounding landscape to start filming.  The area surrounding our landing-space is filmed before we lift up the rig and are pulled behind the vessel for 700m, all the time while we record the video-feed. At the end of the 700m we land the rig and do another scan of the seafloor there. This is a normal station.

At one of the stations, however, we ran into an unusual challenge. Swarms of krill crowded our lights – much like a swarm of mosquitoes in the north-Norwegian mountains in summer. It got to the point where we had no chance to glimpse the seafloor between all the whirling krill, and the longer we waited the more crowded the swarm became. In the end, all we could do was to smilingly ask the crew to take up the campod without any last film. After all – these tiny animals are what the sustenance of world’s largest animals. Good for them that they swarm in some areas. The only thing we were lacking was the blue whale. 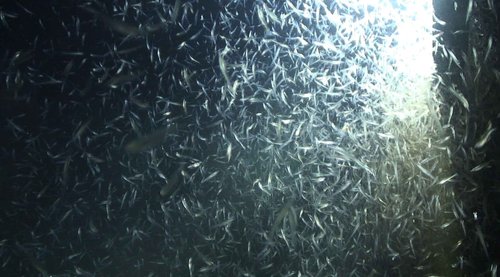 I am a sea urchin

I used to be called a sea hedgehog in the old days. I don’t have arms or legs, but I do have spines that look like tiny stilts that I use to move around, and I have tube feet with tiny suckers on the tips so that I can move on vertical walls.

When I want to groom myself, I use tiny pinchers that I have attached to get rid of rubbish that may sit between my spines.

My mouth is famous among biology students, and consists of five strong jaws made of calcium carbonate. This part of my body is called Aristotle’s lantern – some say this is because Aristotle described me in his History of Animals, and he really liked my mouth.

I like to eat algae, especially kelp with bryozoans on. I can also eat barnacles, seagrasses and tiny diatomea.

My favourite habitat is bedrock and other hard surfaces, and at the photo I am at 65 m depth.

I have no eyes, but on my tubular feet I have cells that react to light and shadow.

Some of you like to eat my gonads, and the wolf fish likes to eat all of me. I actually think I am his favourite food.
So – that was a little introduction to me. Kind regards Echinus esculentus. 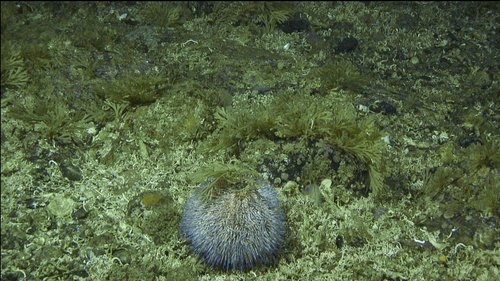 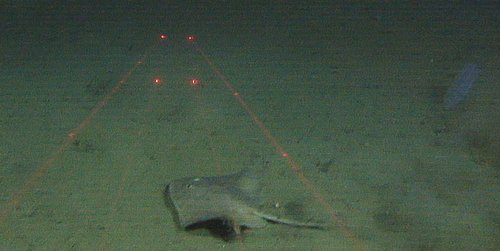 A Thorny Skate floating just above the seabed.

”Look, look, what is that? Could it be a skate? Yes, it is a skate! Type Rajidae in the log… Or perhaps, wait a second; maybe we manage to decide which species it is? It is more or less round shaped and the tail is as long as or shorter than the body, it is a Thorny skate (Amblyraja radiata)!”

Thorny skate is one of the species that really creates excitement among the scientists during the Mareano-survey (August-September 2014). Even though Thorny skate is the most common species of the skates in the Barents Sea, the atmosphere is always reaching the ceiling in the video-room when a Thorny skate is seen on the screen.  Always elegant, floating just above the seabed, the Thorny skate is a great sight. 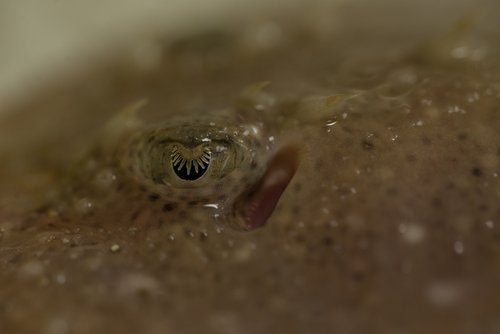 Thorny skate can reach about 75 cm in total length; the dorsal side is brownish while the lateral side is white. It has one central row of thorns which follows the back all the way to the tip of the tail. This row of thorns has from 11 to 19 thorns and if you have a closer look at the thorns you may see they have radial ribs. The Thorny skate’s diet consists of fish, crustaceans and polychaeta, and is widespread along the Norwegian coast and in the Barents Sea. If threatened, the Thorny skate can often roll up into a ball to protect itself. 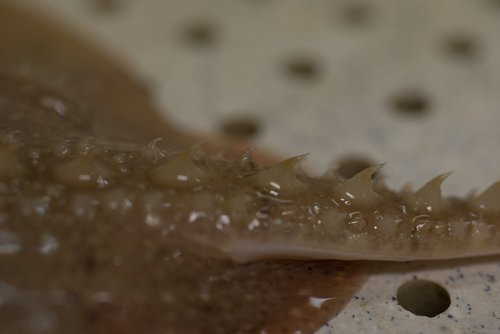 When seeing the term Mollusca most people have a feeling of what kind of animal we are discussing. These are those animals with a beautiful shell - be it from a mussel (Bivalvia) or a snail (Gastropoda), the shells are more constant than the animals, and have been used in jewellery and as money in different places. Such shells are of course also a great asset if a biologist should want to make a species identification – there are lots of nice characters to look at. But – there are molluscs that don’t have an outer shell to protect them. The group most people know about is the octopi, but there are other groups as well, and they are no less intriguing and beautiful if they are less known. 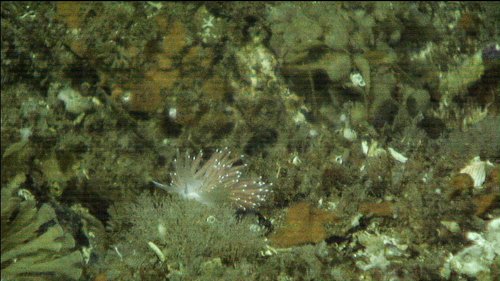 A nudibranch on the sea floor.

One of these lesser known groups is the Nudibranchs (sea slugs). If you know a little latin it is easy to see that these animals do not have a shell – “nudi” means naked. The branchia (latin for gills) reflects upon the fact that the gills are placed on their naked backs – almost like crowns. We see these animals sometimes on our videos – they look quite majestic as they slide along the seafloor. But – there are 90 known species in Norway, and these are some difficult animals to identify to species. Luckily we do have some experts in Norway for this group!

It is not very often that samples of nudibranchs become available from depths deeper than a scuba diver can reach. During this cruise, however, we have been getting Nudis in all our physical sampling equipment, and at this moment they are waiting in various preservatives to be sent to Trondheim – then finally we can learn what we have been observing. 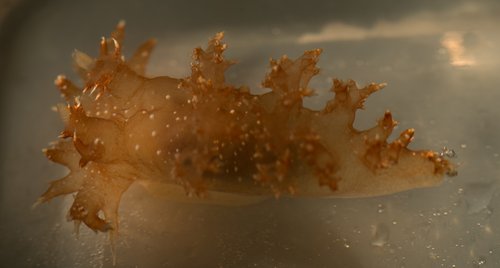 During our cruise we have sent photos and stills from the videos of the different nudibranchs we have found so far, and with their help we have started to narrow down the choices in genera. Taxonomic competence is crucial for this kind of work, and Mareano depend on good collaboration with the Norwegian museums.

If you want to learn more about the “Nudi-guys” in Trondheim, please visit their blog.