Biodiversity is a general term used to describe the diversity of life forms, species and the communities that they form.

Biodiversity is a general term used to describe the diversity of life forms, species and the communities that they form. This diversity can be described at various levels for the purposes of classifying natural life:

In the MAREANO project we are focusing on mapping the diversity of species and biotopes.

The most common way of describing biodiversity is to state how many species there are within a given area. Although that may appear to be easy, there are many challenges that make it difficult to compare the species diversity in different areas. Not all species are equally easy to classify, and no single expert knows about all of the different groups of animals and plants. The amphipod Metopa glacialis is (by the standards of this group of amphipods) a relatively large species: adults are up to 8 mm long. The species can be identified by details on its legs and mouthparts. (Photo: A.H. Tandberg, The Institute of Marine Research) Illustrations of the mouthparts of the Metopa groenlandica. The arrows show the details that are particularly important to the identification of the species. The vertical lines beside each mouthpart give a scale of 0.1 mm. (Drawings: A.H. Tandberg, The Institute of Marine Research)

The tools used to collect samples for species diversity studies are also a source of variability in results. No single tool is suitable for all biotopes, and the different tools don't collect the same groups of organisms. A beam trawl is a small bottom trawl fitted with a net with a relatively coarse (often 2-5 mm) mesh. It is used to collect the larger organisms that live on the sea floor and slightly down into the upper layer of sediments.

A hyperbenthic sledge has a mesh size similar to the coarsest plankton nets (0.5 mm), and is designed for collecting small crustaceans that live just above the sea bottom. The MAREANO project studies the part of the sample that floats to the surface when the sample is put in a water tank (the decanted fraction). The rest of the sample  the part that sinks to the bottom of the tank  is collected and studied further by other interested scientists.

To obtain samples of animals that live down in the sediments, a grab is used. The grab takes a deep bite out of the sea bottom, usually ranging from 0.1 to 0.25 m² in size, depending on the type of grab. The MAREANO project's grab takes 0.25 m².

Clearly, to compare the species diversity in different areas you must collect samples using the same tools, and the most commonly used tool for studying species diversity in conjunction with environmental impacts is the grab. In the MAREANO project we use all three of the tools described above, which helps us to describe the full diversity of species and the total biomass and production as accurately as possible.

These tools all work best on relatively smooth sea bottoms, and it is difficult to use them where the sea bottom is rocky or covered in boulders. In the worst case scenario, a beam trawl or hyperbenthic sledge can be damaged or lost if it is used on those kinds of sea floors. This is where video observation becomes invaluable. Although videos are often insufficient to reliably determine species, standardised analyses make it possible to compare biotopes. The species diversity of large organisms (over a few cm) observed on video is much lower than is documented using collection tools. Nevertheless, videos can be used to compare species diversity between different areas.

Species diversity is governed by the variety of environments. In areas with little variation, e.g. where the sea floor is flat, and consists of sediment of small and uniform particles of clay, species diversity is lower than in areas with more variation, e.g. where there is a mixture of gravel, stones and sand. In these latter biotopes, there are more habitats and ecological niches (the living environments of individual species). Biotopes where one or more species create extra spatial structures have the greatest diversity of species. In the areas studied by MAREANO, coral reefs and sponge communities are the best examples of this. 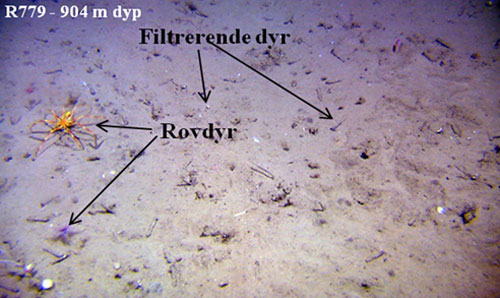 There appear to be few species living on this sand and clay bottom, although it is relatively rich in fauna down in the sediments. Coral reef on hard bottom which forms many small pockets for different types of animal.

The variety of biotopes is related to environmental variation. The most important drivers of environmental variation in the sea are currents and geological processes. Together with the currents, the climate governs the variation in the water temperature, salinity, nutrient content and other factors associated with water conditions. The shape of the terrain largely determines how quickly the water flows and the distribution of sea bottom substrates. This can be illustrated by the example of steep slopes, where loose, fine sediments do not stay where they are; instead they slide down towards deeper areas. Over ridges and cliffs, currents are stronger than over large plains and basins, in the same way that on land it's windy on mountain tops.

The geological history of the area, with repeated ice ages that have raised and lowered the land masses, is one of the important reasons why there are different sediments in different areas. On the continental shelf, for example, there are several moraine ridges where rocks and gravel create a firm substrate that rises slightly above the surrounding sea floor. Plough marks left by icebergs at the end of the last ice age are also characteristic landscape features with unique biotopes. In the MAREANO project, indexes for terrain variation are being used very successfully as environmental surrogates to model the distribution of biotopes in areas where biological and geological information has not yet been collected.