By the end of this cruise we will have complete data coverage within the Finnmark coastal belt, north of the outermost islands. The next step will be to interpret the data to make geological maps of the seabed which will complete the map series between Troms and Varangerfjorden. These maps give a lot of information directly to a variety of users but are also used further to make habitat and environmental maps.

The present cruise will map areas between Sørøya and Nordkinnhalvøya - black lines denote stations that are to be visited. Note the undulating seabed terrain along the coast and the large, wide fjords without thresholds at their entrances. Brown colours show depths down to 100 m, yellow colours depths between 100 m and 200 m.

The geology along the Finnmark coast is varied. On land, we find mainly old and hard metamorphic rocks such as gneiss, quartzite and schist. These continue into the offshore area, where they form the strandflat. The strandflat is the low lying, undulating landscape we find in the archipelago zone along the coast and the underwater continuation of this zone. On this type of seabed, we find a special fauna dominated by sessile organisms such as ascidians, soft corals and hydroids. These animals attract other animals such as sea-stars and anemones as well. In the shallowest areas there is a lot of calcareous algae (Lithothamnion) - these are plants that look like rocky crusts, often violet in colour.

Further out from the coast, there is a belt of sedimentary rocks of Carboniferous to Permian age (around 360-250 mill. years old). These drape the metamorphic rocks and slope gently away from the mainland. These sedimentary rocks contain corals and also coal layers which are several hundred million years old. However, they are covered by younger surficial deposits from the ice ages and can not be seen on the seabed. Even further out from land, we find rocks deposited in the Triassic, Jurassic and Cretaceous (260-65 mill. years ago). Within these rocks, we find oil and gas fields including Snøhvit and Goliat. Oil and gas are crucial to the Norwegian economy and without rocks from these time periods on the continental shelf, the country would be considerably less wealthy.

During the ice ages, glaciers transported sediments of all grain sizes. These were mixed together and deposited as basal till below the glaciers. Till covers a large part of the seabed outside of the strandflat. Moraines deposited in front of glaciers frequently contain coarse grained sediments such as gravel, cobbles and boulders, while more fine-grained sediments were deposited in front of the glacier when they retreated. On the shallow banks, the sediments are winnowed by waves and currents - this happened immediately after the last ice age when the sea level was much lower than today. The winnowing removed the fine grained particles, leaving a coarse grained lag of gravel, cobbles and boulders on the seabed. Seabed sediment type is one of the most important factors determining which animals can live on the seabed today. 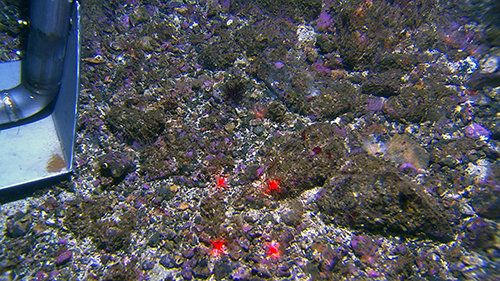 Video image from the strandflat outside of the Finnmark coast. The seabed here comprises gravel, cobbles and boulders. The foot of the video rig can be seen to the left while the distance between the red laser dots is 10 cm. Bluish violet colours show calcareous algae (Lithothamnion). When these algae die, they form white carbonate sand (shell sand) which is an important substrate for other living organisms. This kind of sand is locally important also as a geological resource where it is exploited for many uses including filtering of drinking water and as an agent against acidification of rivers and lake.

The Finnmark coast is dominated by wide fjords which are almost like oceans areas. Fjords and shallow sounds follow fractures and weakness zones in the bedrock, as do deep trenches on the strandflat. Several of the fjords have a thick sediment cover on top of the bedrock. In contrast to the fjords in west Norway, the fjords in Finnmark often lack a threshold at their entrances. This means the water masses can move freely in and out of the fjords. Because of differences in bottom type, the fauna in the fjords can be quite different from the fauna that is found on the strandflat outside of the main coastline.