MAREANO has been surveying at Knivskjelodden, the northernmost point of mainland Europe, just outside Nordkapp. Here, detailed bathymetry data show the presence of sandwaves on the seabed at more than 300 m water depth. Video footage of the seabed acquired during this cruise revealed a light coloured sandy bottom, looking suspiciously like carbonate (shell) sand we know from shallower waters. It appears that sandy sediments move along the seabed with the bottom currents in a trench just north of Knivskjelodden. Data collected by bottom penetrating sonar show that the sand layer is up to 3 m thick. 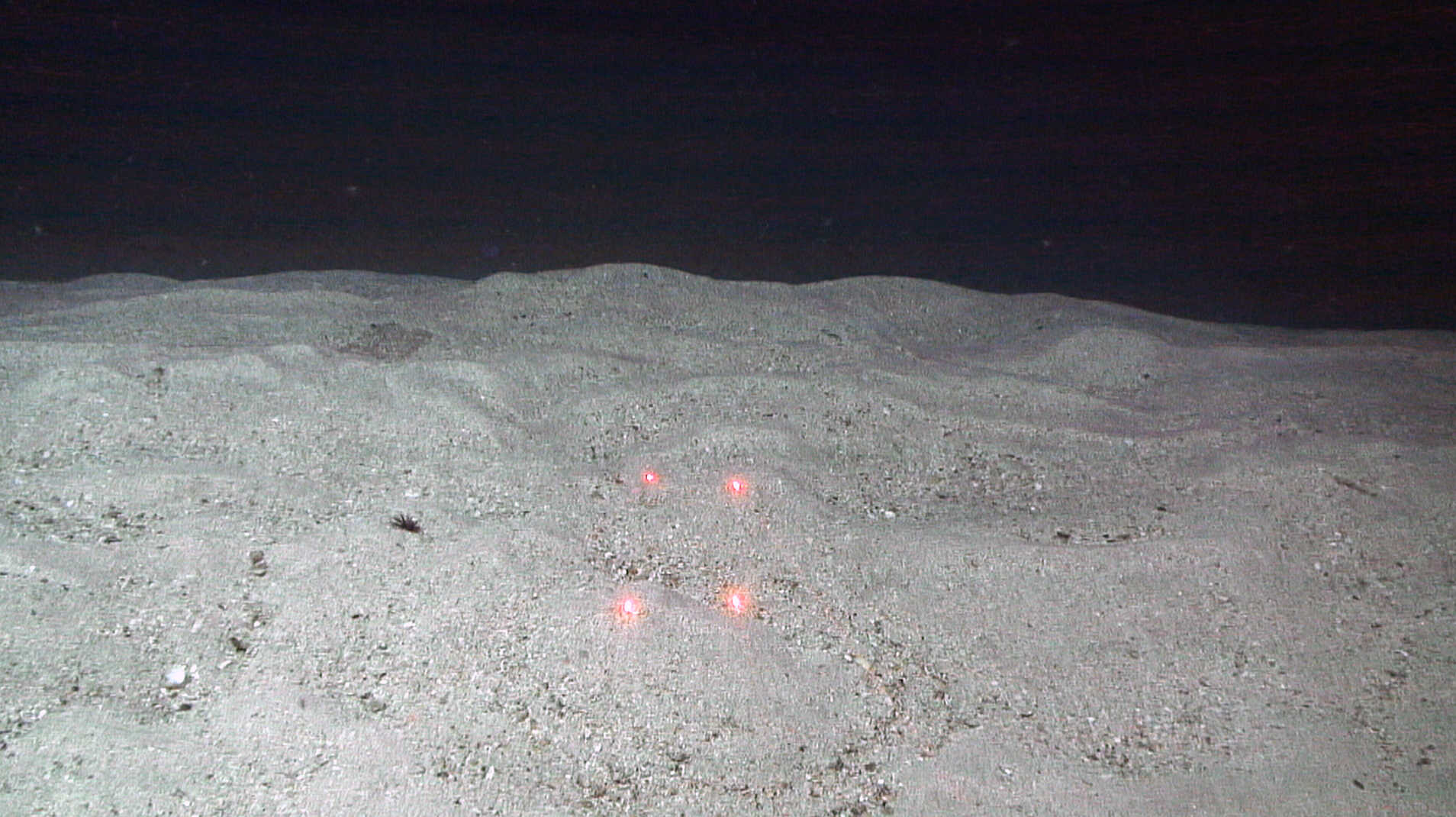 Video image of the seabed north of Knivskjelodden, where the bottom sediments at 300 m water depth comprise pure shell sand. Sandwaves and sand ripples migrate along the seabed carried by the bottom currents. The grey spot on the seabed to the upper left is a skate with almost perfect camouflage colours. Distance between red laser dots is 10 cm.

It is unusual to find pure shell sand in such deep waters - usually the sand from deeper areas has a relatively high proportion of other mineral particles. Earlier, we have found similar carbonate sand deposits only in the Hola glacial trench, outside Vesterålen. However, our suspicions based on the video footage were confirmed when several buckets of pure carbonate (shell) sand were collected by MAREANO’s grab and bottom sled.

Shell sand, comprising whole and crushed shells, is usually found in the coastal zone, where deposits can be several metres thick. The shell sand occurs between island and skerries in exposed areas, in water depths from a few metres down to more than hundred metres, where it is washed down by waves and currents. Shell sand along the coast is mapped as a nature type in a separate mapping programme for Norway’s coastal zone. In addition to being an important nature type for several organisms living on the seabed, it is used for several purposes, e.g. to prevent slippery winter roads and against acidification of rivers and lakes. 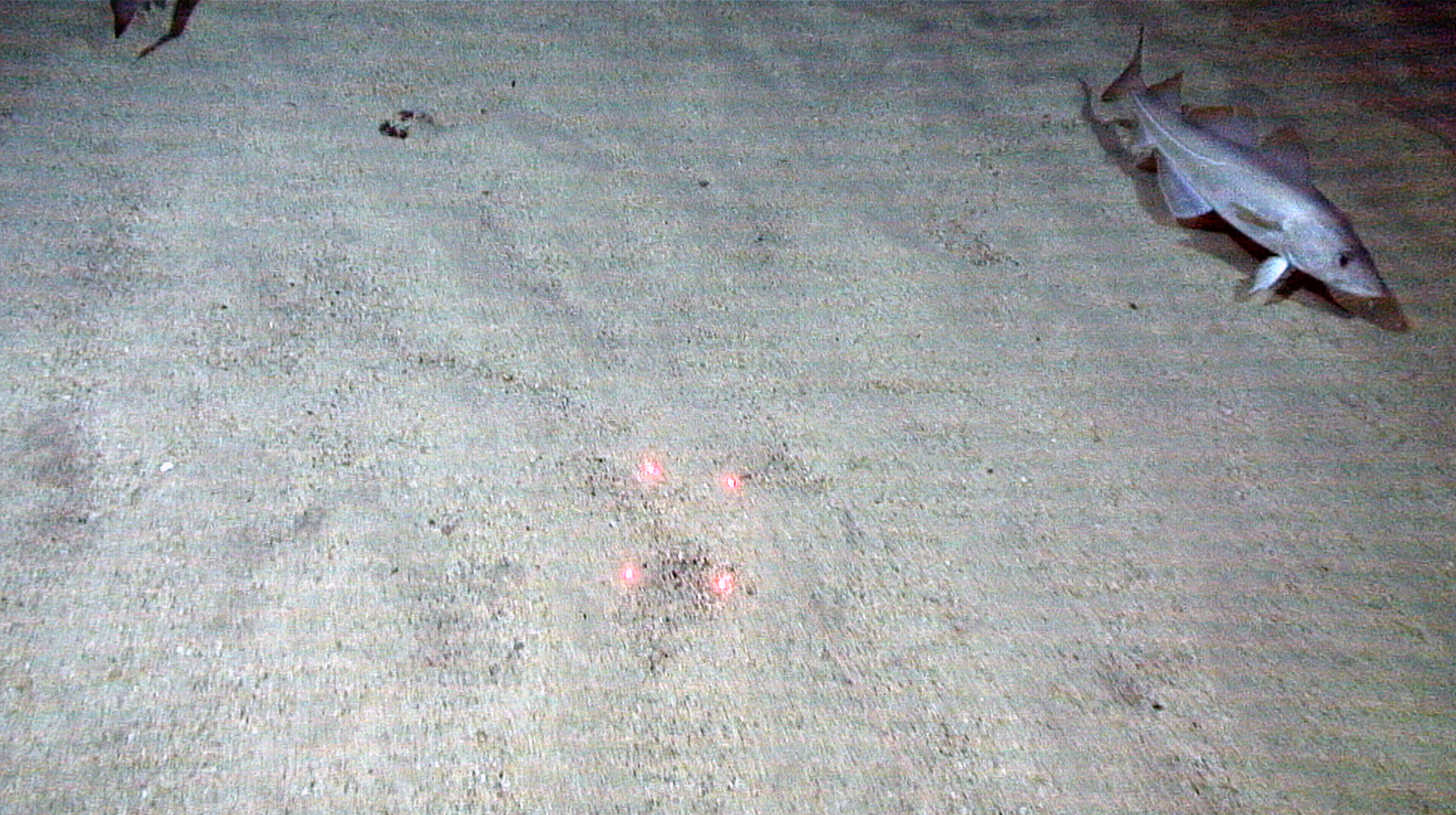 Seithe, cod and haddoc thrive on the sandy seabed, looking for smaller fish hiding in the shell sand. Distance between red laser dots is 10 cm.

A graveyard on the seabed

The biologists onboard confirm that the main components of the shell sand are bryozoans, brachiopods, echinoderms, gastropods, bivalves, barnacles and polychaeta. Many of the animals have probably lived in shallow areas along the coast. Once dead, they were transported by waves and currents to the trench outside Knivskjelodden. The Norwegian Coastal Current runs along the coast just outside Nordkapp and Knivskjelodden, and may have transported shells from areas to the west.

From earlier investigations in other places, we know that the shells can be several thousand years old. Strangely enough Knivskjelodden means razor shell peninsula.  Perhaps can the name be linked to the shell sand deposits?