Around 55 million years ago there was volcanic activity in the northeastern part of Mørebanken, offshore mid-Norway. Today we can find remains of this volcanism in the form of a steep sided column-like mountain rising from an otherwise fairly flat seabed, which now provides a home for a variety of fish and other bottom dwelling animals. 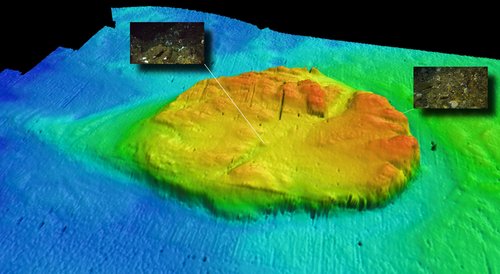 The “Vest-Brona volcano” is a 1400 m by 1100 m wide, 70 m high volcanic plug which rises up from the surrounding seabed. The plug consists of solidified magmatic rocks in a volcanic pipe. The ‘tail’ of the plug to the left of the image is probably sediments left behind during glacial erosion. The thumbnail images (full size images later in article) show rocks from the volcanic plug (left), and the image with the colourful fauna (right) is from the wall of the volcanic plug.

MAREANO’s autumn cruise is still underway on Mørebanken, which is an important fishing area, and one of the most important herring spawning areas in the Norwegian Sea.  The investigations on Mørebanken will help us gain better knowledge on where the herring spawn, but there are also many other reasons this area is of interest, not least the “Vest-Brona volcano”. 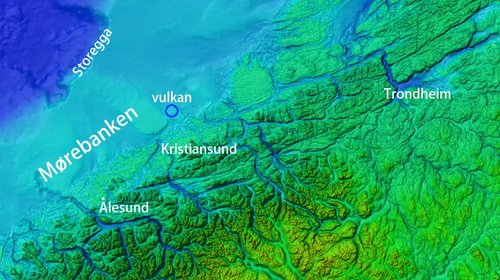 The Vest-Brona volcano – from the time the Norwegian Sea opened

Around 60 million years ago Northern Europe started to break up and Greenland started to move away from Norway. The Norwegian Sea opened and volcanoes spurted out lava and ash.  The steep sided volcanic plug we find rising from the surrounding sea floor today offshore Griptarane is the remains of a volcano that was active around 55 million years ago. It is a volcanic pipe through which magma was brought up to what, at that time, was the earth’s surface. Over the millions of years since then the area has been eroded, particularly by by glaciers which were very active during the last ice age. These huge glaciers had sufficient power to erode everything but the hard rocks which solidified within the volcanic pipe itself.  The surrounding sedimentary rocks which were penetrated only by liquid magma were no match for the power of the glaciers and have been eroded away leaving only the hardest rock we see today at the Vest-Brona volcano. Studies published in the 1980’s indicated that the rock is of a type called porphyritic olivine nefelith and dating by the K-Ar method gave an age of 55.7 +/- 0.9 million years (Bugge et al., 1980, Marine Geology 35, 277-286).

Researchers from the Institute for Continental Shelf Research and the University of Trondheim examined the volcanic plug in the late 1970s and made this profile figure over the volcanic plug.  The arrow points to the plug itself which rises 70 above the surrounding seabed.

The first thing we did when the MAREANO cruise arrived at the volcanic plug very early on a Friday morning (21.9), was to use the multibeam echo sounder on board the Research Vessel G.O. Sars to build up a detailed map of the area. After converting the (as yet unprocessed) data to a digital terrain model we could clearly see the structure of the volcanic plug reveal itself.  The next step was to plan a video transect that would give us even more information. We decided to start in the east, and head west, much like the profile line in the figure below.

This is how the profile of the volcanic plug looks based on modern bathymetry data from the multibeam echosounder on board G.O. Sars. Note how steep it is in the east (right) with a slope of up to 70 degrees, and how the gradient is more gentle on the west side where the plug has a small "tail".

At the start of the video line the bottom was flat, and covered by sandy gravel and large boulders. As soon as we reached the base of the volcanic plug, things changed completely. The plug was like a wall going almost straight up! This steep wall was covered with colourful organisms, including some soft corals. 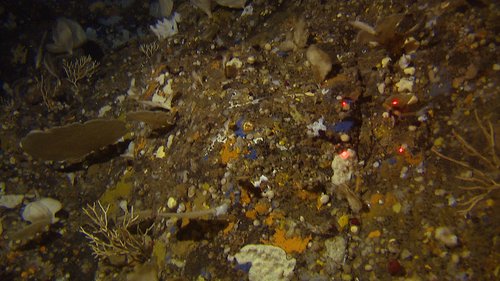 Image from the wall of the volcanic plug: Colourful organisms covered the lower part of the wall, further up various sponges dominated.

Unexpected findings on the top of the volcanic plug

Once we were up on the top of the volcano the terrain leveled out. We saw oblong shaped, smooth rocks making for quite a rugged seabed, which in places was covered with larger blocks, and had sand and gravel in depressions.  As we neared the middle of the volcanic plug on a small mound in the central depression (see first figure, left image) we saw something unexpected. We expected that the very top of the volcanic plug would probably have been eroded by the glaciers that we knew had shaped so much of the underwater landscape out here. However, as the video camera began to move over the mound we saw irregular blocks and formations of what looked like volcanic rock, with rounded cavities. These seemed similar to pictures we have seen from places like Hawaii, where daring photographers have filmed close up on underwater volcanoes. Could it be that this crater like form on our volcanic plug is actually the remains of the original volcano shape? If so this would indicate that the glaciers that covered this area, and eroded so much of the former seabed have had little impact on the volcanic rocks. Perhaps the area in the middle of the plateau has avoided erosion because it is in a depression? It could of course be that the features we see are simply eroded and weathered rock surfaces and this may well be the most likely explanation. Nevertheless we cannot rule out the possibility that what we see here are actually the remains of the lava which rose to the earth’s surface and flowed out here 55 million years ago. It is not possible for us to give an answer yet, based on the observations we have available but these latest observations have certainly raised questions that beg for further research. Further studies, using the latest underwater technology may be able to help find out more. For example using a remotely controlled underwater vehicle we could get much more detailed mapping using a high resolution sonar, we could also take close up photographs and collect physical samples of the rocks. Data like these would really help bring us a step closer to the uncovering the truth behind the rocks and revealing the geological history of this ancient volcanic plug. 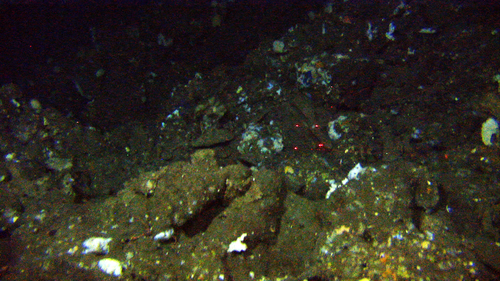 Irregular blocks and formations of the volcanic rocks. Could this be lava which has flowed out on the seabed?

Walkabout at the seafloor

Cruise report: While using a video-rig to map the biodiversity of the sea-bottom, we often observe animal tracks crossing the seafloor. Such tracks can be holes, mounds or traces that are a result of the animals’ movement. This last week we have seen many such very decorative tracks on the seafloor in the area of Sunnmørsbankene at around 200 m depth, and the amount and density of the tracks bear witness of quite heavy “traffic” in some areas.

Cruise report: During the 2012 MAREANO autumn cruise, scientists onboard RV ”G.O. Sars” discovered 15 new coral reefs off the coast of Trøndelag and Møre and Romsdal counties.