Cruise report: During the 2012 MAREANO autumn cruise, scientists onboard RV ”G.O. Sars” discovered 15 new coral reefs off the coast of Trøndelag and Møre and Romsdal counties. 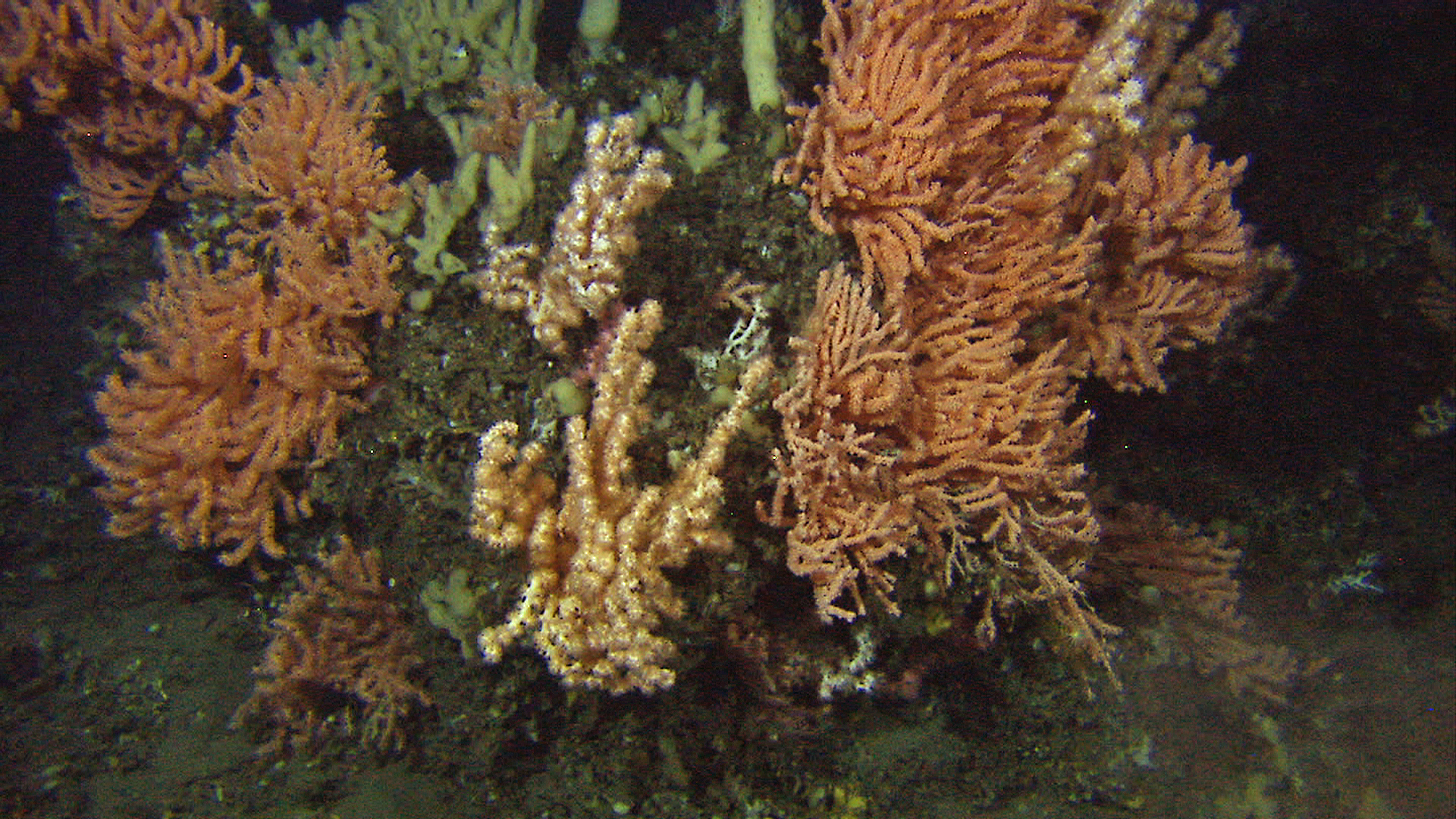 Cold-water coral reefs are probably the most species-rich habitat in Norwegian water.

Mid-Norway is known for its numerous cold-water coral reefs, which occur both coastal and offshore. The coral reefs are made of the stone coral Lophelia pertusa. In 1758 Carl von Linné described this species based on specimens his colleague, bishop Johan Ernst Gunnerus had retrieved in Trondheimsfjord. At that time corals were classified as Zoophyta, or flower-animals, a very descriptive term for how these cnidarians appear. However, they are animals. These cold-water corals eat zooplankton and remains of phytoplankton sinking from shallower water. When the Norwegian oil company, Statoil, in the 1990’s discovered lots of coral reefs on the Sula Ridge research on such reefs was boosted, not only in Norway but also internationally. The IMR started a project to map the extent of damage caused by bottom trawling. Prior to IMR discovered the Røst Reef in 2003, the Sula Reef was the largest known cold-water reef complex in the world. It contains around 500 individual reefs clearly visible on detailed maps made by multibeam echosounder. 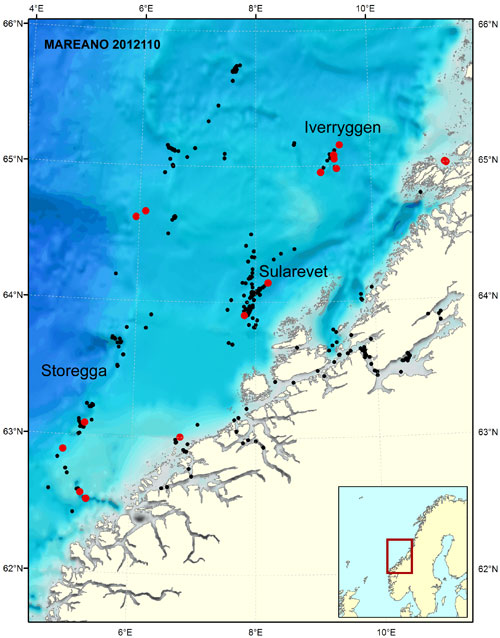 The red dots show the reefs that were discovered during this cruise.

The findings of new reefs during this cruise are not a surprise since they occur in areas where there has already been reported occurrence of reefs. They have been indicated or documented by fishers, scientific seabed surveys or petroleum related surveys. Many of these records are unprecise regarding geographical position. The MAREANO-records are valuable not only because of the precise location but also because they provide information about state of the reefs. Of the 15 new reefs 11 were alive, while the rest could be dead. To confirm wether these also contain live Lophelia pertusa we have to survey larger parts of the reefs with video. The live parts of a cold-water coral reef can cover a very limited area. This is especially evident on the elongated reefs growing towards a more or less uni-directional current. The live corals here cover less than a living room, while the whole reef may be a couple of hundred meters long and around 50 meter wide. However, there are cold-water coral reefs without a single live colony of Lophelia pertusa. Most of these have died long time ago, probably due to environmental changes, for instance created by land rise after the last glaciation. This has been the fate for several reefs occurring at shallow depths in the fjords. Out on the shelf we can find coral reefs that has been completely destructed by bottom trawling. 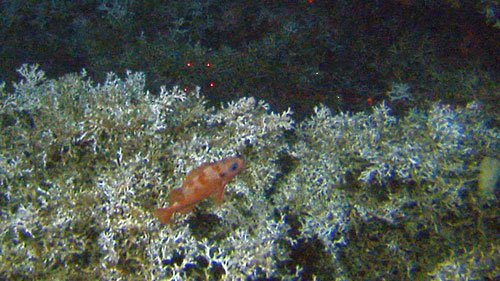 Redfish (Sebastes) is a common fish on the reefs.

At some of the locations investigated on this cruise damaged reefs were observed. This was especially evident on one location on Storegga shelf break. This is an area where IMR also earlier have documented extensive damage to corals.

The number of coral reefs that have been recorded in Norwegian waters is now close to 1100, but estimates based on interpretation of detailed maps indicates that there could be more than 6000 individual reefs off Norway. Ageing of coral skeletons from different reefs show that they commonly are between 6000 and 9000 years old. The reef structures use long time to develope but it takes very little bottom trawling before they are gone. This is the background for the regulations from 1999 where intended damage on known reefs is prohibited. Cold-water coral reefs are probably the most species-rich habitat in Norwegian water. 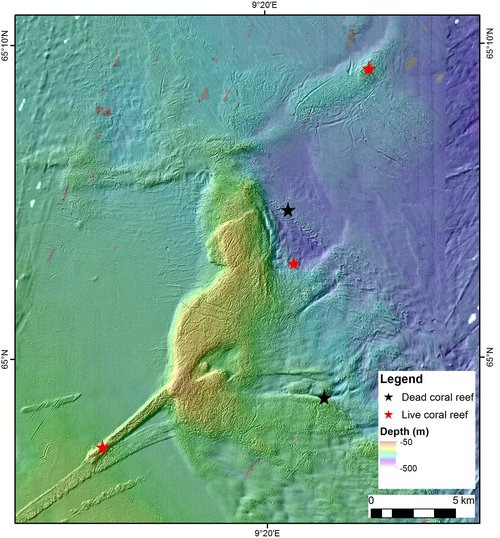 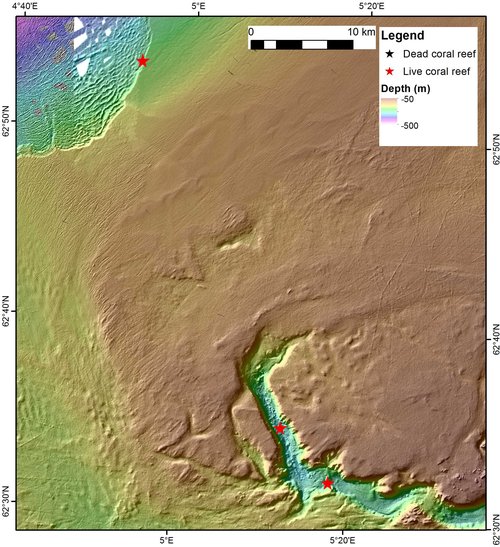