Walkabout at the seafloor

Cruise report: While using a video-rig to map the biodiversity of the sea-bottom, we often observe animal tracks crossing the seafloor. Such tracks can be holes, mounds or traces that are a result of the animals’ movement. This last week we have seen many such very decorative tracks on the seafloor in the area of Sunnmørsbankene at around 200 m depth, and the amount and density of the tracks bear witness of quite heavy “traffic” in some areas.

The highways we observed have been created by the sea urchin Spatangus purpureus, whom we caught “red-handed” on several occasions in the middle of bulldozing a new road in the gravel. We don’t know for certain what this animal eats down at this depth, but one probable food source is the dead organic material that is there.

The sea urchins have “walked about” on the seafloor, and doing so they have also created long labyrinthine traces. Since sea urchins are shaped like buns (in Norwegian, the vernacular name of a sea urchin is a sea “bun”), they move using long tubular legs that are parts of a hydraulic system. Liquid is pressed out in the tubular legs so that they are elongated, then a suction-like end attaches, and the liquid is moved out of the leg so that it shortens and the animal is “dragged” forwards. The typical spines might also help in this movement. From studying the tracks on the photos below, it is easy to see that this species has a large influence on the environment, and as such should be viewed as a key species in the areas they are found. 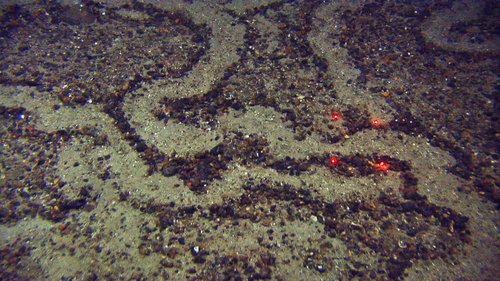 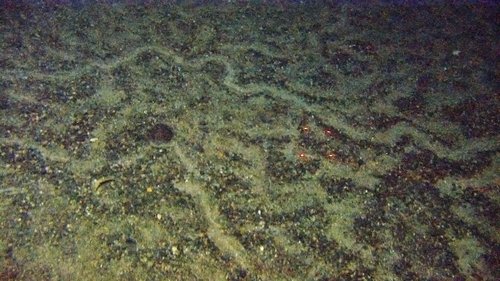 Some of the nice labyrinths produced by Spatangus purpureus we have filmed.

Another sea urchin we have seen a lot of this last week is Cidaris cidaris. Typical of this species is its long and thick spines that can look like pencils. Many smaller animals are often seen living between the spines, and thus we can think of this species almost as its own little ecosystem. C. cidaris is usually found on other bottom-types than S. purpureus, so it is not common to find them together. C. cidaris is probably omnivorous, but we were still surprised when we twice spotted dead fish full of C. cidaris (see picture below). 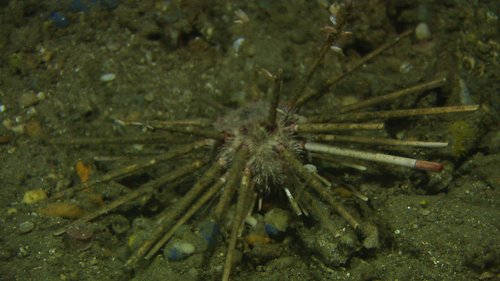 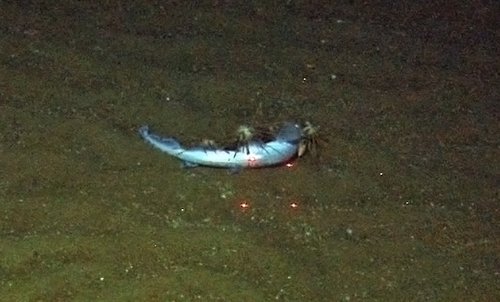 We have sometimes been thinking we are looking at the starry skies when observing sandy seabeds with our videorig on this cruise. Looking closer, we have discovered that the stars have been mini sea urchins – in very high numbers and density. In some areas there have been as many as two hundred in one square meter. These urchins have also come up in our samples, and we have identified the little spiky friends to the genus Echinus – a group of sea urchins that are very much alike as juveniles. Some of the samples were so dominated by the youngsters that we almost did not see the other animals that were caught in our trawls and sledges. The measured size of our juvenile Echinus was approximately 1 cm, and this confirms that they are of this years spawning. Many bottom-living invertebrates have an oscillating recruitment, and we think this group of animals must have had a good year. 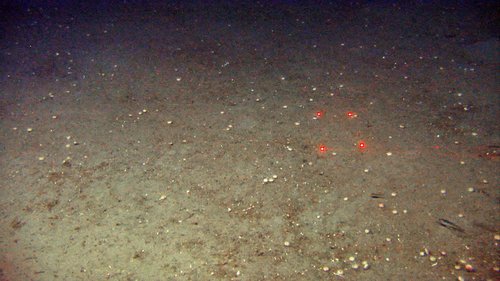 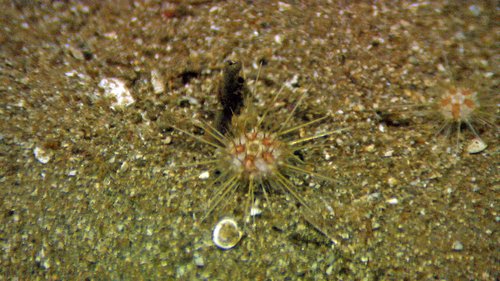 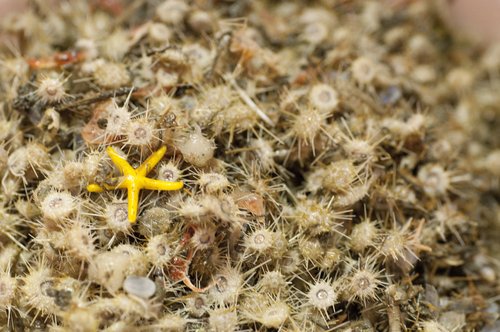 Also along the edge of the Mørebankene we have found coral reefs (Lophelia pertusa). What we could observe of the living parts of the reefs was quite small, but a large number of white branches of coral were seen spread out over a large area. This breakage of the reef could be a result of human activity. Even though the remaining live pieces were small, we found fish using the reefs as protection or habitat.

Both common ling (Molva molva), redfish (Sebastes spp) and cusk (Brosme brosme) seems to like being very close to the coral reefs. The picture below shows common ling close to a combination of live and dead coral reef pieces. 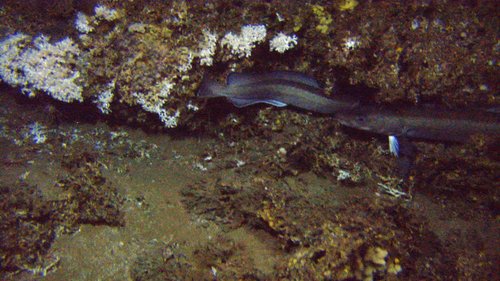 Common ling close to a combination of live and dead coral reef pieces. 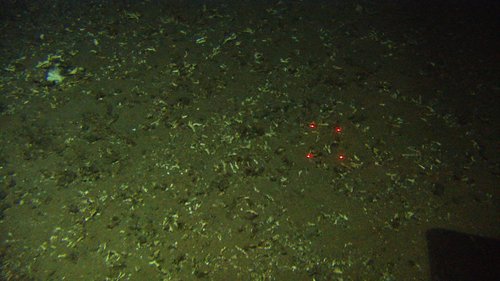 Pieces of the coral Lophelia pertusa that are spread out on the sea-bottom after being broken.

The banks outside the Møre coast are famous for its high abundance of fish, and also this we have observed during our video-surveys. Especially saithe (Pollachius virens) have been abundant, - and they seem to like to use the lights from the video-rig to hunt for prey. This school of saithe followed us a whole transect, making it almost impossible to see the sea bottom we were there to observe.