Bivalves in the Barents Sea are still surprising

Cruise diary: The bivalve expert, Dr. Graham Oliver from the National Museum of Wales, is on his second cruise with the MAREANO programme aboard the G.O. Sars. He is continuing to build a library of DNA samples of the bivalve “Thyasiridae”.

But on this MAREANO survey another interesting bivalve showed up: Bathyarca glacialis. This is an “arcoid” bivalve, a group that is most frequently found inhabiting warm or tropical seas; Bathyarcas are unusual in being confined to cold high latitude seas or to bathyal and abyssal depths. Arcoids do not have siphons but Bathyarca has a unique adaptation in the presence of mantle flaps that extend beyond the shell edge when feeding. This enables the inhalant and exhalant flows to be separated and may help in conditions of high suspended matter.

The small suspension feeding species Bathyarca glacialis was abundant in the soft muddy sediments of the more northerly stations in the Barents Sea “south-east”. This was unexpected as species with an active byssus most often are found attached to stones. Most of the larger Bathyarca glacialis appear not to be attached while those that were had adhered to fragments of worm tubes. The numerous epifauna on the shell indicated that they were living in the surface layer with the dorsal and posterior parts of the shell protruding. 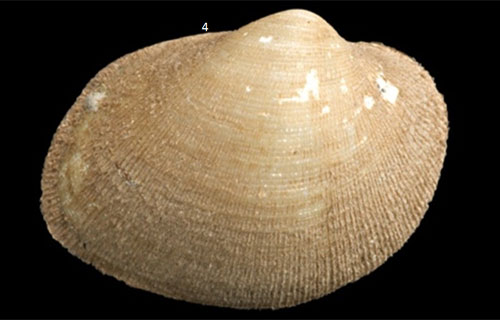 Specimens of the bivalve Bathyarca glacialis were placed in mud in the refrigerator in the laboratory on board R/V G.O. Sars. After 24 hours the bivalves began by ploughing through the surface with the mantle extended and this may be a normal behaviour allowing them to relocate and maintain their position at the surface of the mud.

Read more about the bivalves in the Barents (pdf).

MAREANO expedition ahead of schedule
Environmental samples from new areas of the Barents Sea
Salt diapir and gas leakage on Tiddlybanken
The south east Barents Sea: the kingdom of the sea anemones
A seabed full of pockmarks