The gas leakage was known from earlier Russian investigations, in which also Norwegian geologists and biologists participated. Tiddlybanken is however so special that also MAREANO decided to visit it. 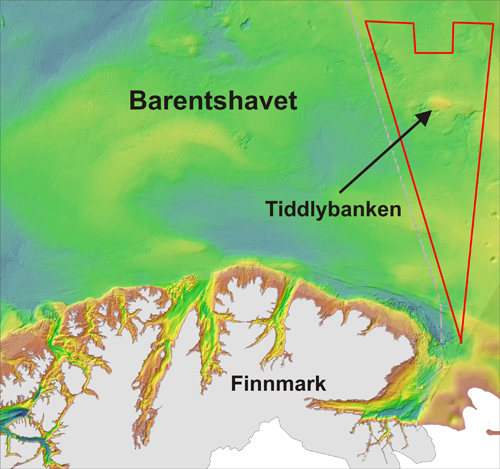 A map published by the Geological Survey of Norway 10 years ago shows that the bedrock beneath the gas leakage consists of evaporite (mainly salt but also gypsum and other minerals). Thick layers of evaporite were deposited at the bottom of the Barents Sea approximately 300 million years ago. This was caused by evaporation of sea water, resulting in deposition of minerals at the seabed. Thick layers of other sediments were deposited on top of the salt layers during later periods.

Salt is less heavy than other sediments. When thick layers of salt are buried deeply enough, the salt will start to move upwards through the overlying sediments just like the bubbles in a lava lamp. One major difference is that the process will take tens of millions of years instead of a few minutes as in the lava lamp. 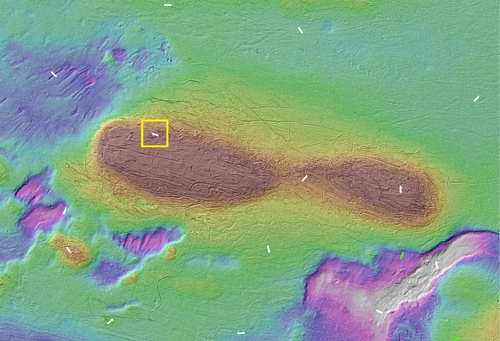 Figure 2: Map showing hills and valleys on Tiddlybanken. The shallowest bank areas are shown in brown (c. 180 m), while the deepest water areas are grey (c. 340 m). Video transects are shown as white lines, each 700 m long. Yellow square shows the video line at the gas leakage site. The location of this area is shown in Figure 1.

Holes in the seabed and gas leakage 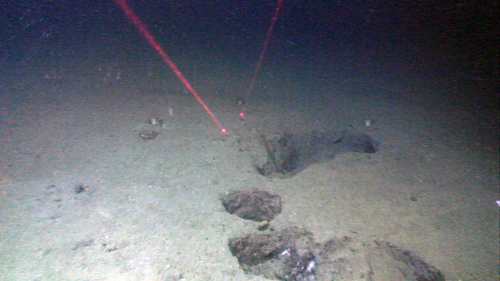 Figure 3: Picture of the seabed in the area of the gas leakage (see Figure 2).The bottom sediments consist of a thin layer of mud, sand and gravel. We do not know with certainty what occurs below, but the bedrock map suggests that it may be salt. Burrowing animals have several places made holes in the seabed. The holes seen in this picture are however more than half a metre in diameter and do not resemble animal burrows. They may be created by gas or fluids leaking trough the seabed and dissolving salt in the underground. The distance between the two red laser dots is 14 cm.

Figure 4: Shallow seismic line acquired by bottom penetrating sonar (Topas) onboard G. O. Sars. The seismic line runs along the trace of the video line and shows where gas leaks from the seabed (observed in echosounder data) and where large holes occur in the seabed (close to the topographic depression). Figure 2 shows the position of the line.