MAREANO has obtained access to existing bathymetric data acquired by other operators. The data are very valuable and will contribute to the progress of the programme.

MAREANO has obtained access to existing bathymetric data acquired by other operators. The data are very valuable and will contribute to the progress of the programme.

The data sets received will be used to create terrain models of the seabed, which will be used in connection with geological, biological and chemical surveys in 2012.

MAREANO has obtained access to the following bathymetric data sets in 2012:

MAREANO greatly appreciates the assistance of the Norwegian Defence Research Establishment, Statoil/NDP and Olex in sharing data with the programme. It means that the resources for new surveys can be used to cover areas which have not yet been mapped with extensive bathymetric data. In previous years (2005-2011), MAREANO has been granted access to a significant amount of existing bathymetric data acquired by FFI and the Norwegian Mapping Authority Hydrographic Service. The programme has also had access to data from the Norwegian Petroleum Directorate, Statoil, the Institute Marine Research and the University of Tromsø.

The bathymetric data sets are used to create terrain models, which in turn are used to identify special features in the seabed terrain such as coral reefs, pockmarks (created by gas emissions), and so on. The news article Oppdaget tre nye korallrev utenfor Trøndelag (Three new coral reefs discovered off the coast of Trøndelag), published in May 2012, outlines how terrain modelling based on bathymetric data from the Norwegian National Defence Research Establishment was used to identify coral reefs north of Frohavet, off the coast of Trøndelag. During the survey using the research vessel G.O. Sars this spring, some of the video recordings of the seabed were superimposed on locations where the terrain model indicates features resembling coral reefs. The video recordings confirm the existence of the coral reefs. This supports the assumption that other similar formations in this area are coral reefs.

The terrain models will be used later, in combination with the results of the geological and biological surveys, to model biotopes. More information about natural biotopes can be found here. 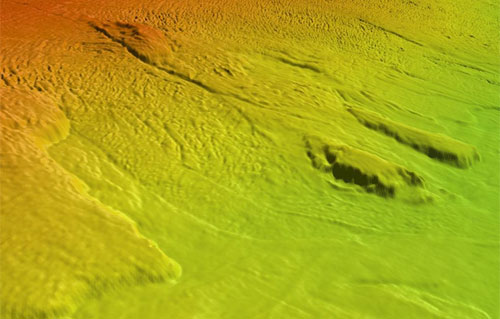 The bathymetric model produced by Olex AS is rather special as it consists of a large number of criss-crossing lines of single beam data. These have been acquired by a large number of vessels using the Olex system. Since the acquisition was principally carried out by fishing vessels, the best coverage is in areas with a high level of fishing activity. MAREANO has used the data to create terrain models with a resolution of 50m × 50m. This provides a continuous terrain model in areas with high data density, though there are some gaps in the model in areas where the data density is lower. The bathymetric model which MAREANO has received from Olex has 5m × 5m cells. Each cell either has a value (calculated as described above) or is empty. Based on the 5m × 5m cells, MAREANO has created a terrain model with a resolution of 50m × 50m. To avoid having too many gaps in the terrain model, the search radius is set at 200 metres. Normally MAREANO uses a 100-metre search radius when modelling in a 50m × 50m grid.