Cruise report: The second part of MAREANO's "spring cruise" is underway and is due to end in Tromsø 22 May after a 10-day cruise off the coast of Trøndelag, mid-Norway. After two days of investigations three unknown coral reefs have been found, of which one is probably a couple of hundred meters long.

Cruise report: The second part of MAREANO's "spring cruise" is underway and is due to end in Tromsø 22 May after a 10-day cruise off the coast of Trøndelag, mid-Norway. After two days of investigations three unknown coral reefs have been found, of which one is probably a couple of hundred meters long. A sponge ca. 15 cm in length (Mycale) seen off the coast of Trøndelag, mid-Norway, surrounded by a number of other species. Notice the holes in the sponge where water is pumped out after being "filtered" through the smaller openings and fine channels. Inside the sponge, tiny organic particles are being filtered out, making up the sponge's nutrient source. In addition to the sponge, we see a brittle star (Ophiuroidea) on the sponge, and some small, white bryozoan colonies belonging to the family Horneridae.

The second part of the MAREANO "spring cruise" sailed off from Bodø 12 May and will last until 22 May, when the voyage will end in Tromsø. After 22 hours steaming-time towards south the research vessel "G.O. Sars" arrived at the survey area off Halten in Trøndelag County, mid-Norway on Sunday afternoon. In this part of the voyage MAREANO is to survey, through video-filming, a "corridor" 12 mile wide and 70 mile long just outside the coast  from Halten and southwards to the city of Kristiansund.

After a short period with good weather conditions a strong gale set in, upon which all video survey operations were halted, on account of a high risk of damaging the video rig (known as Campod), which "flies" 0,5  1 m above the sea floor. After another 10-hour filming period a new storm came into our area, followed by 20 hours of downtime on board, which was used for maintenance of the vessel's propulsion engines.

MAREANO has not previously been further south than the waters off Lofoten. The registered faunal communities off Trøndelag do not seem to differ very much from what we have observed to the north. This was not entirely unexpected for the most conspicuous species, which are the major types of organisms that can be detected by the video camera. But when it comes to the smaller species collected by grab, beam trawl and sled, it is expected that the differences will be more apparent. Such sampling tools are not being used on this cruise but will be used on a later MAREANO cruise.

Scattered occurrences of the tree-shaped corals Paragorgia and Primnoa were registered on several of the investigated localities, as did lots of different sponges. The most tangible difference between north and south were the relatively frequent visits by rabbit fish (Chimaera monstrosa) and the small shark blackmouth catshark known to occur from Morocco to northern Norway.

Three previously unknown reef formations (Lophelia pertusa) were registered off Frohavet, Trøndelag, and again we observed that the redfish thrives in such environments. One of the reefs was visible in the video monitors over a distance of a couple of hundreds meter, while the other two reefs seemed to be a few tenths of meters in diameter. In addition to the video observations, the batymetric map shown below, based on multibeam measurements, indicates that hundreds of small Lophelia reefs may occur along the ridges that cross the surveyed video-lines.

A large reef of Lophelia pertusa was observed over an about two hundred meters long video-line at 320 m depth off Frohavet, Trøndelag County, Norway. The coral Primnoa is seen to the right. A few tens of meters long coral reef at 320 meters depth north of Frohavet, Trøndelag. The patchy areas of white Lophelia corals represent the outer living layer of a large coral colony. Over time, these fields are split up and give rise to new colonies. Such colonies may be several hundred years old. When they become too large their skeleton breaks up. These broken off fragments may roll down the reef where they either die or they may survive creating further growth of the reef. This is the way the reefs grow over thousands of years and is called vegetative reproduction by fragmentation. The importance of sexual reproduction in such reefs is not well known. The anemone Bolocera occurs quite frequently in the surveyed areas off Trøndelag. Here, surrounded by several holes in the bottom sediments at about 460 m depth. The holes might be dug by an amphipod species or perhaps by the squat lobster Munida. A rabbit fish floating elegantly above the bottom by using the wing-like fins. This fish was quite often caught by MAREANO's camera. Here in a small "forest" of sea-pens (Funiculina). 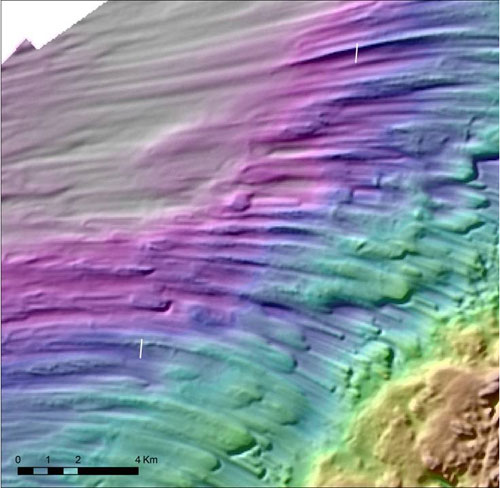 The map shows the sea floor terrain where some of the MAREANO video lines were undertaken north of the Frohavet, Trøndelag, and where coral reefs were found at 300 - 350 meters depth. The sea floor terrain shows a number of smaller peaks on both rock ridges that cross the two video-lines in the figure, indicating that hundreds of small reefs may occur along these ridges. (The terrain model is produced by MAREANO based on depth data collected by Norwegian Defence Research Establishment, FFI).