The incredible world of Storegga

Last autumn MAREANO scientists documented the geology and biology of the southern part of Storegga, which lies at the edge of the continental shelf in mid-Norway. Now we are back to complete the journey through this fascinating underwater landscape, armed with new multibeam data that complete the picture of the terrain on the shelf.

In this story we take a step back and consider why the sea floor looks the way it does today. The Norwegian word ‘Storegga’ translates literally as ‘big edge’, and it is not without good reason that this part of the continental margin has a name of such proportions. This is the very place where, around 8150 years ago, the underwater landscape changed dramatically, and irreversibly, and started a chain of events which shook large parts of the North Atlantic. 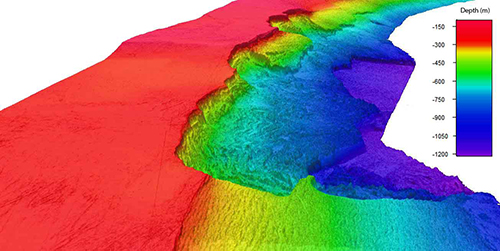 ‘An edge with an edge’
The Storegga Slide is one of the world's largest known underwater landslides. It is the most recent of a series of submarine slides triggered right here at Storegga. Scientists(*) have estimated an area of 95 000 km2 was affected and that somewhere between 2400-3200 km3 of sediments were sent plummeting down into the abyss, creating a chasm in the former continental slope.
To understand why an event like the Storegga slide could happen we have to go a long way back in time. Over the course of millions of years, a huge volume of sediments have been brought into this area by a multitude of processes. During ice ages, glaciers rapidly deposit a large amount of mixed sediments (ranging from mud to boulders), which are easily driven down the slope by gravity. Fine muds, which have arrived via meltwater plumes, settle slowly through the water column. In addition, currents are constantly winnowing the seabed, sorting and mixing the sediments. 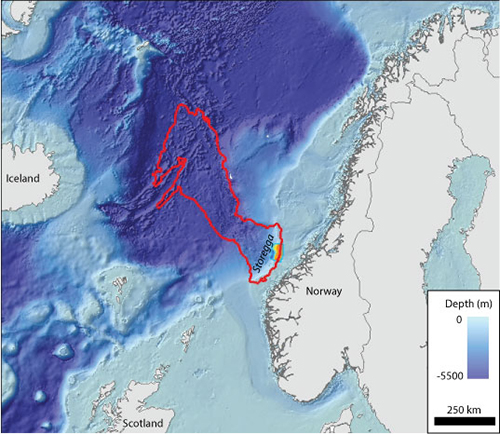 Location map showing the extent of the Storegga slide (red polygon). The slide deposits extend 810 km* offshore from the upper edge of the slide. Storneset is the coloured area being mapped by this cruise.

As a result the seabed is made up of layer upon layer of sediments with different physical properties. Layering can be stable up to a certain point, but much like an overloaded cake, can also be an accident waiting to happen. Just one more cherry on top, or an unfortunate nudge, and the whole structure collapses.

But how could the seabed collapse?

As ice ages come and go, the waxing and waning of ice sheets fundamentally alters the natural world, including the volume of the oceans, the sea level, and the elevation of continents. As more water is tied up in ice sheets, the amount of water in the oceans is reduced and sea level drops (eustatic changes). Meanwhile, when an ice sheet reaches a certain size it will press down the landmass it is resting on, which in turn causes the sea level to rise (isostatic changes). What we perceive as sea level is actually a combination of eustatic and isostatic sea levels. These control the total volume and geometry of the oceans at any given time, and also affect the pressure exerted on the seabed sediments and where and how they accumulate.

With the retreat of the ice sheets these changes are gradually reversed over the course of thousands of years. This leads to large shifts in the loading of Earth’s crust, including the seabed. As landmasses rise through isostatic rebound, earthquakes occur quite frequently. Earthquakes, changes to seabed loading, and temperature changes (which occur with the withdrawal of the ice from the seabed and the arrival of warmer waters) may all lead to altered pressure of the water within the sediments (porewater pressure), which is one of the main factors controlling sediment stability. Any of these factors could potentially trigger an underwater landslide and scientists are not certain whether it was one, or a combination of them, that was the smoking gun actually setting off the Storegga slide. What they do know is that the effects of the slide were far reached, and that around the same time a huge tsunami raced across the North Atlantic.

Also read: Living in a landslide