On their way to the depths

During the MAREANO-survey April 13–26 a large number of king crabs were observed at about 40 m depth just off the village Berlevåg in the northernmost Norwegian county Finnmark. It is well-known that the king crab thrive in this area and was on its way towards deeper waters after a short trip to quite shallow depths where hatching, spawning and mating take place at this time of the year.

The video shows king crabs (Paralithodes camtschaticus) with shell length of between 11 and 13 cm, which means that they are sexually mature. King crabs become sexually mature when the length is 11cm. The crabs were filmed at about 43 meters off Berlevåg in Finnmark County. The rest of the year the king crab in this area stays at depths down to several hundred meters. Juvenile individuals with a shell length of less than seven cm are not sexually mature and stays, in contrast to the adults, in shallow waters throughout the year and may occur in large numbers as shallow as 10–15 meters depth.

The female carries fertilized eggs, so-called "berried females", under the abdomen for almost one year. When the crab larvae are ready to be hatched, the female migrate to shallow water to give the larvae the best possible conditions.

The just hatched larvae are carried by the currents for about two months before they settle on the bottom. Despite the fact that the larvae drift around so long, local currents may keep the larvae in the same area as they were hatched, for example within a fjord. Some larvae will, on the other hand, drift with the currents over long distances. The adult crabs are known to walk long distances, probably causing the most important spreading mechanism for king crab in Norwegian waters. 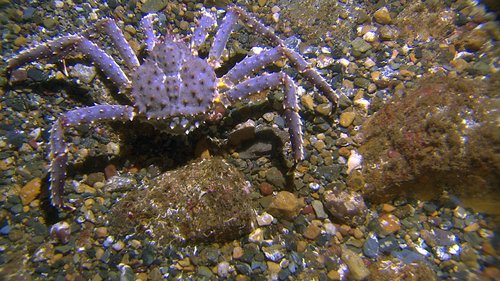 After the female's hatching, the males know how to react. They have been in shallow water for a while, waiting for the females to come by. Each male crab selects a female and carries her around until she is ready to change to a new shell. He helps with the moulting and will mate when she spawn the new eggs. The new roe latches under the abdomen of the female crab where it develops to hatching larvae in February/March next year. After hatching the crab head for depths again, and stays there until approaching the next hatching time.

Read more about the King crab.

MAREANO mapping off the coast of Finnmark
Kartlegger på Finnmarkskysten

MAREANO mapping off the coast of Finnmark

Cruise diary: Sunday April 13 at 13.30 we left Tromsø and have since conducted 26 video transects and six
sampling stations, where a suite of gears is used.