Biotopes are regions with similar communities of animals living on the seabed, in a similar physical environment. This is the first time a detailed biotope map for the Eggakanten mapping area is available, which uses detailed analysis of video data as a basis for predictive modelling of biotope distribution across the entire Tromsøflaket-Eggakanten area. The previously published map* was based only on field observations. 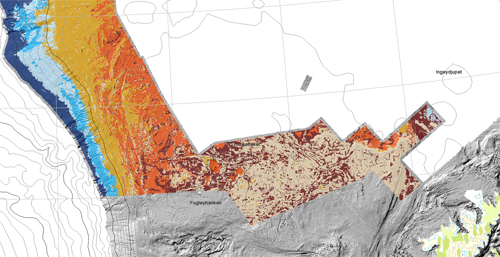 Updated map showing the distribution of dominant biotopes across Tromsøflaket-Eggakanten.

The map shows the distribution of dominant biotopes across the Tromsøflaket-Eggakanten area mapped by MAREANO over several years. The legend summarises the physical characteristics and typical species for each biotope class in the Tromsøflaket-Eggakanten area.  Biotope maps like this are a key part of MAREANO’s information on marine benthic habitats. Maps of biotope distribution are useful for determining the vulnerability, species richness and uniqueness of an area. This is important information of marine spatial planning and sustainable management.

The seabed in the Tromsøflaket-Eggakanten area has diverse bottom types and topography created through by a variety of processes including glaciers and submarine landslides.  This geological setting, together with the large range in water depth and associated currents gives rise to a range of environmental conditions, within which the seabed dwelling animals find the most favourable area to live. On the shallow part of the continental shelf we have identified three biotopes. The most characteristic biotope here (red) is dominated by sponges (mostly various species of Geodia) and other large sponges which are often associated with sandy muddy sediments. The two other groups seem to be discriminated by the local topography. One (beige) hosts fish species which typically prefer a seabed with more structure, e.g. boulders, where they can form territory. In the remaining shallow-shelf biotope (brown) we find species that generally prefer large areas of uniform seabed. As we move towards the outer continental shelf and upper continental slope we find two further biotopes, and another two biotopes extend deeper on the slope. There are considerable differences in the species composition between these biotopes.

Biotopes and biotope modelling at Tromsøflaket-Eggakanten