Can we find gold in mud?

Cruise diary: MAREANO often writes cruise-reports about all the beautiful and exciting things we observe with out video-rig. This is of course a very important part of the MAREANO-programme, and much of our cruise-time is allocated to filming our videolines. These data are the backbone in our descriptions of nature types, and they are the basis for our maps (e.g. maps of vulnerable nature types). But don’t believe that all we do on a cruise is to sit in the dark videoroom watching the sea-floor. We sample using quite a lot of other methods as well! 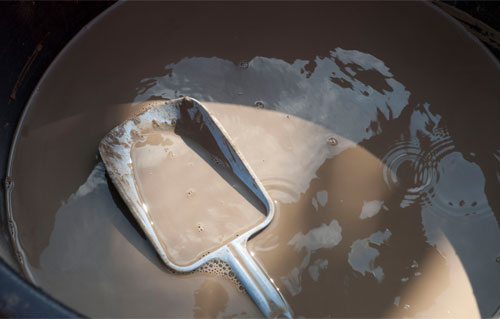 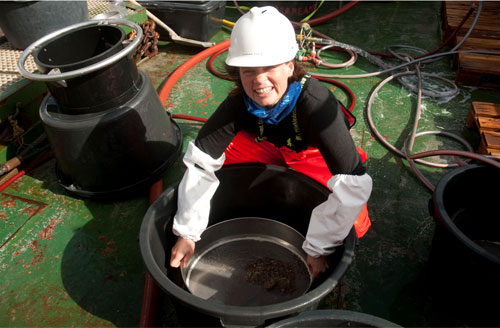 MAREANO operates with common cruises for geological and biological mapping. In the newsletter "Sampling of seabed sediments on Skjoldryggen, mid-Norway" our geologists have given a good introduction to the geological and chemical sampling we perform during our cruises, so this newsletter will continue this with explaining about the biological sampling.

Every fifth station we use five different tools in addition to our videorig Campod, and at the same places we measure the temperature and salinity of the watermasses with a CTD-sonde (Conductivity, Temperature, Density). Three out of the five gears are for biological samples, and with these we can sample the animals that live in, on or right above the sea floor (infauna, epifauna and hyperfauna).

First out is the grab - this collects infauna (animals living in the upper layers of the soft sediments). The grab takes a “bite” of the sea-floor, and this we wash carefully over a series of sieves to reveal the animals that live in the sediments. Many of these animals are pretty small, and most are polychaets and mollusks.

First out is the grab - this collects infauna (animals living in the upper layers of the soft sediments). The grab takes a “bite” of the sea-floor, and this we wash carefully over a series of sieves to reveal the animals that live in the sediments. Many of these animals are pretty small, and most are polychaets and mollusks. 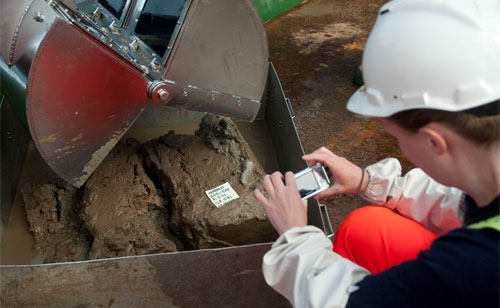 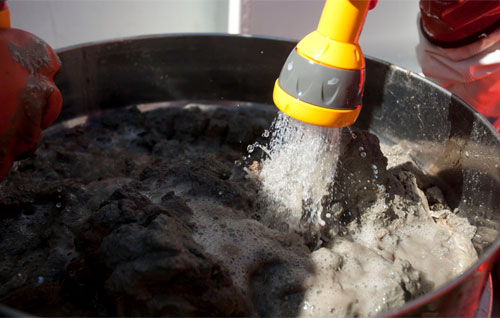 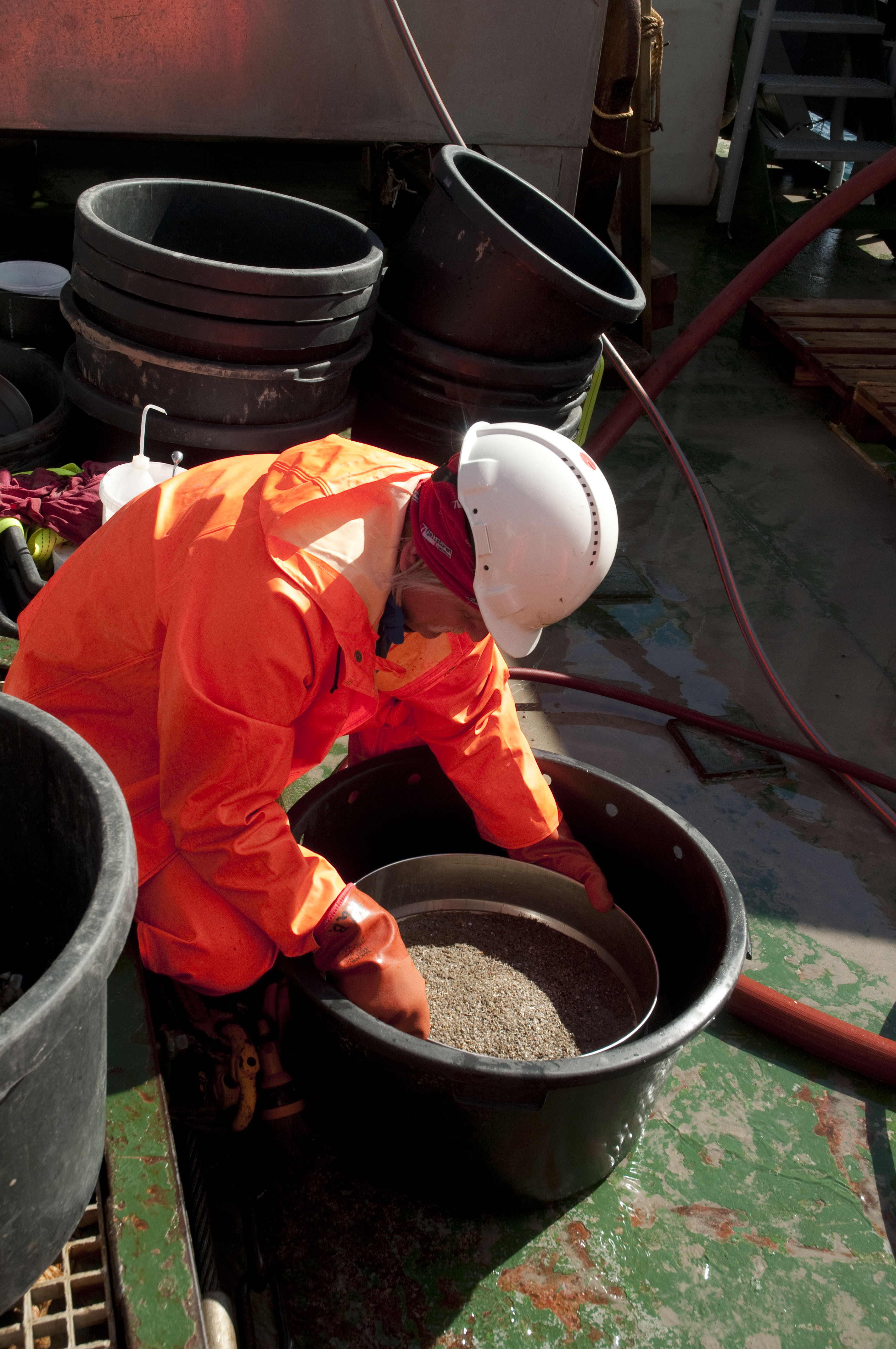 Next out is the beam-trawl, which cathces the slightly larger animals that live either in the top centimeters or right on top of the sediments. Many sessile animals (e.g. sponges and sea anemones) come in this sample. The beam-trawl gives us the most “photogenic” samples, and many of the animals are the same we observe along the video transect right before we start our physical sampling of the sea floor. Examples of this are seastars, fish, crayfish and squat lobsters. 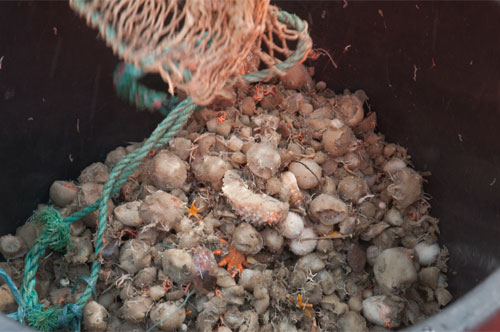 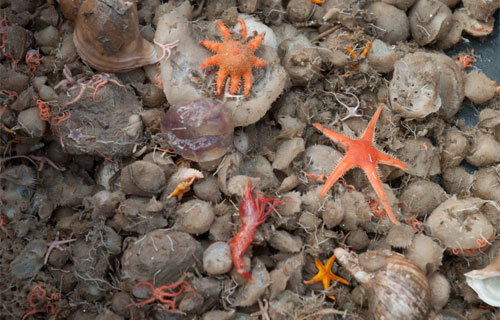 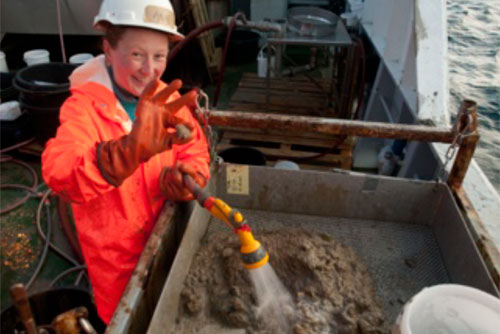 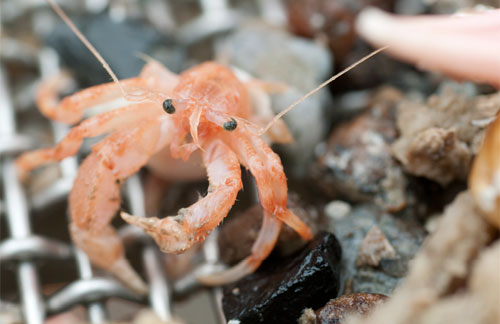 The final biological sampler to be used is the epibenthic sledge - which collects the small animals that live directly on the sea floor and int the water masses right above the sea floor. This is mostly crustaceans, but there is normally also quite a number of polychaeta in these samples. The net of the sledge is very fine (1mm) - and the size of the individuals in the catch thereafter.

More about the methods. 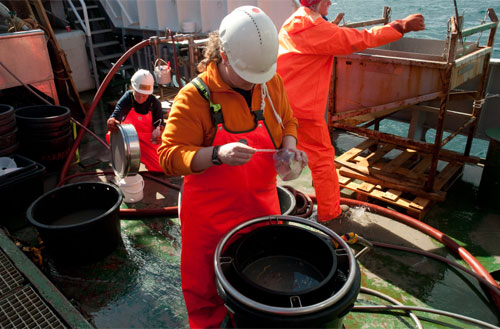 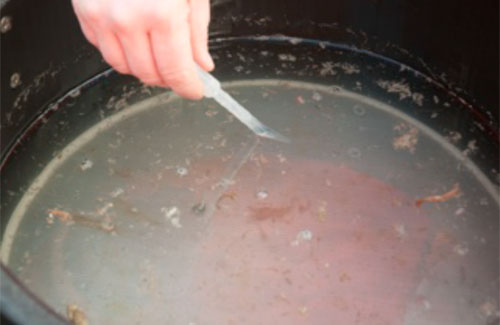 All the animals we sample are fixated on ethanol or formaldehyde, and shipped by the crate to our labs in Tromsø and Bergen for identification and quantification. This is a very tedious work, but this is also where we can find the “gold” we have washed so hard to find. Large quantities of the Norwegian fauna have been described scientifically a long time ago, but there are still species to discover. Every year new species are discovered in the MAREANO material, and with parts of the material fixated in ethanol we also have the possibility to describe these genetically. A project with Bergen Museum, the Norwegian Species Initiative and MAREANO work to do this. For more information, see for instance "MAREANO finds unknown species". All samples from MAREANO are, after being identified by one of our 10 identifiers, deposited at the Bergen Museum, where they form a part of the collection. 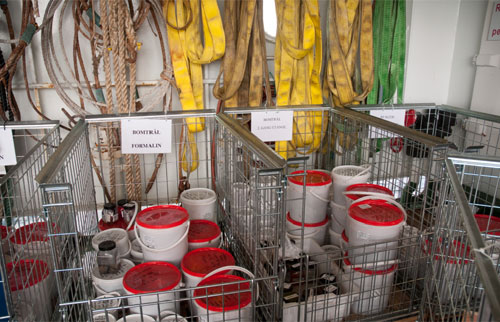 At this first MAREANO cruise of the year, we have had the pleasure to bring professor Sarah Gerken of the University of Alaska (Anchourage). Sarah works with MAREANO researchers describing new species of cumacea from the material we have collected. This work will hopefully be presented in a later newsletter, so follow in our “gold-rush”!

All photos are from this years cruise at the Skjoldryggen,  photographer Anne Helene Tandberg. 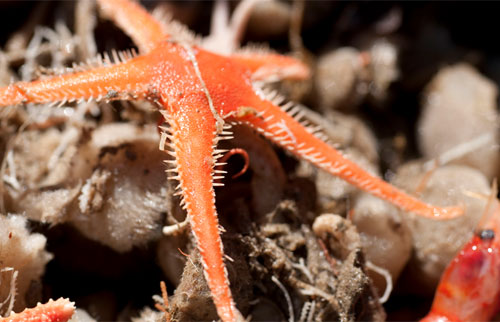 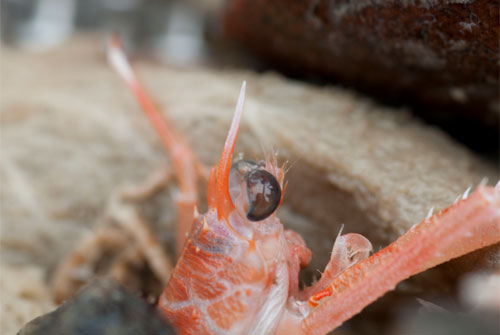 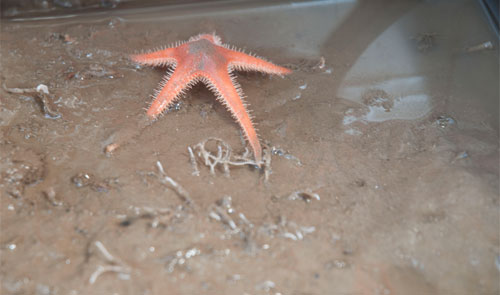 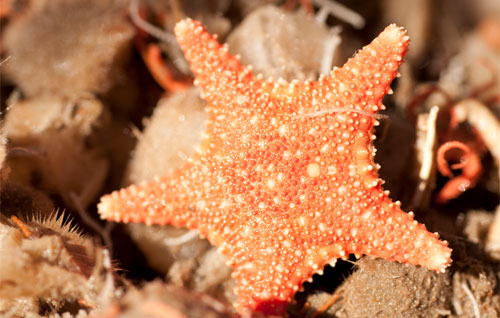 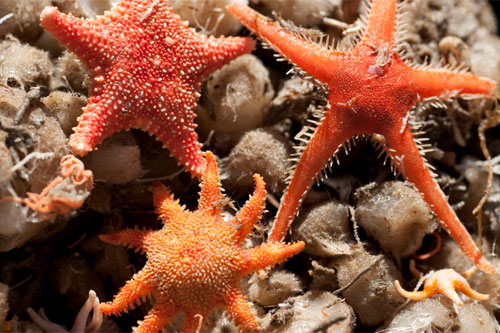 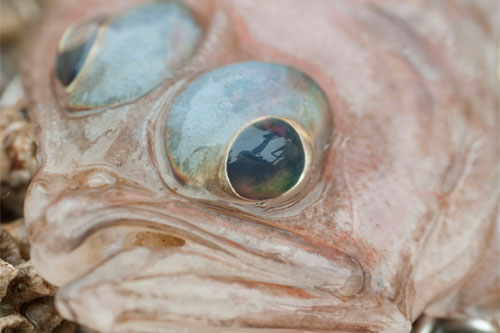 Coral reefs at Skjoldryggen
Sampling of seabed sediments on Skjoldryggen, mid-Norway
The first MAREANO survey 2013 is in progress

Cruise diary: June 19, after half of the planned stations at Skjoldryggen was covered (30 video locations of which seven were also bottom sampling stations), the first leg of the cruise ended in Kristiansund. We have seen small dead coral skeletons (coral rubble) at several locations when using the video-rig Campod. Then, we have most likely passed reefs in their outskirts.