MAREANO scientists have now produced a biotope map for the Nordland VI area in Northern Norway. "Biotope" is a term used to describe the main biological communities and the physical environment they inhabit.  MAREANO video data were to determine the biological communities and this information was put together with bathymetry, terrain and geological data to model the overall distribution of biotopes. 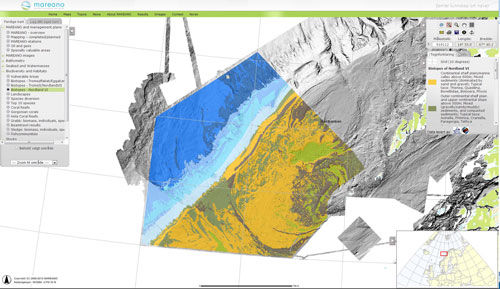 Nine biotopes have been identified in the area through the use of multivariate statistics. Within the Atlantic water mass on the shelf we find four biotopes providing home to different combinations of benthic fauna including seapens, corals and sponge. On the continental slope and deep sea plain we see a general depth zonation in biotopes, also influenced by topography and sediment type.

One biotope is characterised by large sponge species including Geodia atlantica, Geodia barretti, Antho dichotoma og Stryphnus ponderosus. This biotope is not as extensive in Nordland VI as it is at Tromsøflaket further north but remains important. Another biotope on the continental shelf is also characterised by sponges, but these are different and smaller species to those in the soft bottom sponge aggregations described above. Corals (coral reef and forests) are among those organisms which occur within the biotope covering Røst reef.  In the deeper, colder water masses on the continental shelf and deep sea plain we find five other biotopes where species including cauliflower corals, basket stars, cup corals, glass sponges, brittle stars and sea stars are among the typical fauna.

The most important factor controlling species composition in these biotopes appears to be the temperature of the water (a characteristic of the water masses). The major physical factor separating these biotopes on the continental shelf is the sediment type.

Although based purely on data from Nordland VI the new map reveals a number of similarities to those biotopes identified and predicted in neighbouring Nordland VII, and the data allows us to distinguish biotopes to approximately the same level of detail even though this is a smaller study area.  This is encouraging for the next stage of biotope mapping work in which MAREANO scientists will start to harmonise maps produced for individual mapping areas.

For further scientific information on the biotope classes (including typical taxa), and a summary of biotope classification and modelling please please refer to the technical summary:

This page provides a brief technical summary of biotope classification and modelling in the Nordland VI mapping area.