So far, the MAREANO project has focused on areas off the counties of Nordland, Troms and Finnmark. This year, areas off Møre og Romsdal will also be surveyed. The aim is to produce biotope maps to assist with the revision of the management plan for the Norwegian Sea by September 2013.

So far, the MAREANO project has focused on areas off the counties of Nordland, Troms and Finnmark. This year, areas off Møre og Romsdal will also be surveyed. The aim is to produce biotope maps to assist with the revision of the management plan for the Norwegian Sea by September 2013.

- In many areas, we know too little about what there is on the sea bottom. In order to ensure that the authorities have a good basis for making decisions when they revise the management plan for the Norwegian Sea in 2014, it is important to start surveying these new areas as soon as possible, says Aksel Eikemo, who is the head of MAREANOs programme group. When the management plan for the Barents Sea was revised in May 2011, information from the MAREANO surveys played a significant part, including their information about vulnerable biotopes. 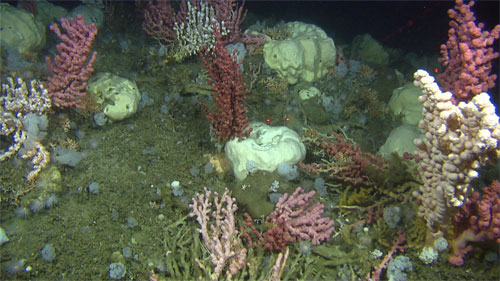 Gravel made of Lophelia corals with bubblegum coral and sponges of the genus Geodia, which were observed on a previous MAREANO cruise.

The most recent MAREANO research cruise, which took place last autumn, was hit by a number of storms. This prevented the scientists and crew on board the G.O. Sars from taking all of the planned bottom samples from the continental shelf and slope off Lofoten, in the area often referred to as Nordland VI. Part of the first expedition this year, which starts on 27 April, is therefore being used to obtain these samples.

- We were able to carry out most of the planned video surveys, so what remains to be done is to take the bottom samples. If time and the weather permit, we will also perform additional video surveys, explains Eikemo.

During this part of the cruise, complete samples will be taken at 29 stations, which means taking samples with the grab, epibenthic sled and trawl. In combination, these complementary pieces of equipment give us a good understanding of overall biomass and production, any pollution and the geological composition of the sea bottom. These corals were observed on a previous expedition.

After that, the G.O. Sars will head south in order to carry out surveys between Kristiansund and Halten, as well as in selected areas in the north-east part of Mørebanken and Storegga. A total of 6,590 km2 will be covered in these areas.

- We are expecting to find cold-water corals in most of these areas, which are known for the wealth of their fisheries. Moreover, Mørebanken is one of the main spawning grounds for herring, so it is important for us to have information about it, says Eikemo.

During the autumn cruise, which starts in September, almost 11,000 km2 of the sea bottom will be surveyed. The areas that will be covered are Iverryggen, Sularevet and several parts of Mørebanken.

In 2012, several vessels will carry out bathymetric surveys in parallel in the Norwegian Sea and in the Barents Sea along the Russian border. The Hydrograf started surveying the Norwegian Sea earlier this month (April), with priority being given to Iverryggen, Sularevet and parts of Mørebanken, so that these areas will be ready for the geological and biological surveys in the autumn. The MAREANO project has also been given access to existing bathymetric data on the Norwegian Sea from other organisations (FFS, Statoil and Olex).