Cruise diary: After 16 hours transit from Garsholbanken, we arrived at a new sampling area, west of Aktivneset. This place is special as it is located at the outer part of the Norwegian Channel, a channel that starts south of Oslo and curves around Norway, before reaching Aktivneset.

This deep channel (~700 m deep at its deepest and ~500 m deep in our area) has been eroded by ice streams which drained a large part of the southern region of the Scandinavian ice sheet during glaciations. Through time the Norwegian channel ice streams have transported enormous amounts of eroded sediments and while some of them was deposited at Aktivneset, the majority continued down the continental slope as debris flows – building the gigantic North Sea fan.

Two major currents meet in this area, the deep (from surface down to about 700 m depth) and warm Atlantic Current, and the shallower Coastal Current (down to around 50 m depth).

In a way, Aktivneset is where the Atlantic Current first hits Norway. The shape of the North Sea fan steers and accelerates the currents here. The first videos west of Aktivneset showed indications of strong currents, and based on the particles moving over the laser scale on the video rig we estimated a current speed often around one knot. These strong currents created well-developed bedforms.

Bedforms are made of sediment that are transported and shaped by currents. There are two main types of bedforms: longitudinal bedforms oriented more or less parallel to the current direction (e.g. sandy ribbons or comet marks), and transverse bedforms oriented perpendicular to the current direction (e.g. ripples). The most widely known of the bedforms are ripples, which often form at sandy beaches. But they also occur in much deeper environment, like here at about 500 m depth.

Bedforms occur when the currents start moving and sorting the sediments. The finest sediment (often sand) is transported and deposited in areas of lower currents, e.g. behind an object (comet marks), or on the lee side in case of ripples. Sediment accumulation also occurs where currents converge, like in the case of sandy ribbons.

Conversely, where the currents diverge, erosion occurs. This erosion and deposition pattern is clearly demonstrated around stones and large sponges, where erosion is observed on the up-current side, and comet marks on the lee side.

In areas with enough sand, bedforms cover most of the seabed. Examples of these are sand ripples or sandy ribbons. Where too little sand is present only comet marks are observed. 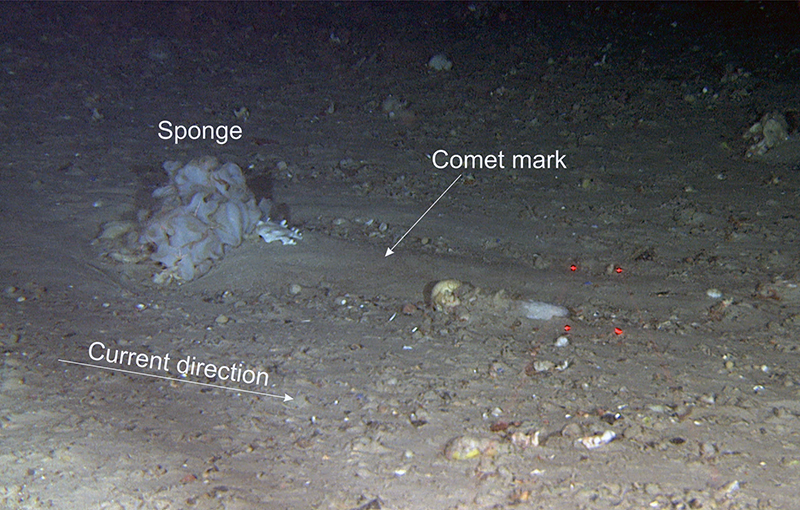 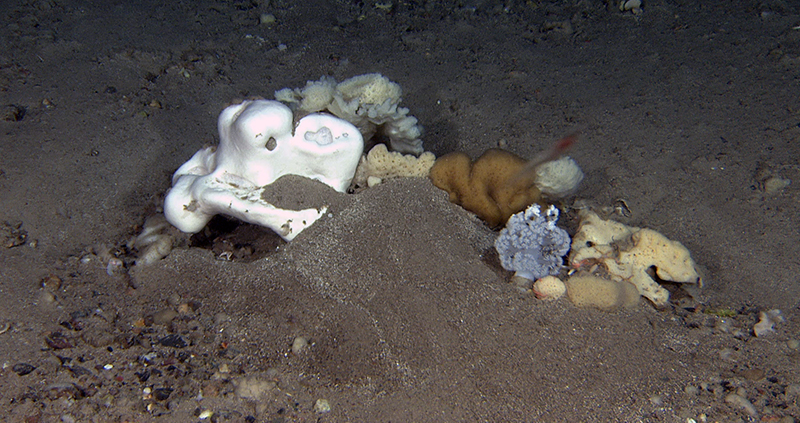