The MAREANO survey continues to the Sklinna Bank off mid-Norway

Cruise diary: The ongoing MAREANO survey has now moved southwards from the Træna Bank to the Sklinna Bank on the mid-Norwegian shelf. The seafloor terrain here varies more than farther north, and we have found hitherto unregistered cold-water coral reefs.

At last, the summer heat has reached RV ‘G.O. Sars’ and the MAREANO survey. We are blessed with temperatures of 16–17 degrees, no wind, and even some coffee chatting in the sun on deck 5. Nice days although the onboard work – using oilskins, helmet and steel-toe boots – continues around the clock.

Currently, on the 13th day, we have collected videos from around hundred stations on the Træna Bank, Trænadjupet, the Sklinna Bank and the shelf farther west.

The Sklinna Bank seafloor terrain differs from the other areas surveyed. Over relatively small distances the terrain and seabed composition changes frequently between mud, sand, stony and other hard bottom. Additionally, the Sklinna bank area including Sklinnadjupet seem to have more living cold-water coral reefs (the eye coral, Lophelia pertusa) that are not yet registered in the Norwegian Coral Database (see www.mareano.no). The species richness is high on the reefs, where a vast number of small holes and coral rubble give ample shelter and food possibilities for a number of invertebrates. Typically, we see redfish, cusk and common ling associated to the reefs. The great krill swarms encircling the video-rig and its floodlights are an indication that the areas visited are nutritious, and we observe large quantities of saithe supplying themselves from a well-filled “dinner plate”.

Sklinnadjupet and Sklinnabanken have been repeatedly shaped by ice age glaciers (Figure 4). Sklinnadjupet is a trough up to 485 m deep where fast moving ice has strongly eroded the sediments. Its seafloor is more than 300 m deeper than Sklinnabanken. In some areas, the fast-moving ice eroded the seafloor down to the underlying bedrock, exposing bedrock ridges where coral reefs nowadays thrive (Figure 2). Mud and sandy mud deposit in the deepest areas of Sklinnadjupet where the depth favors fine-grained sediment deposition.

Conversely, slower moving ice on top of Sklinnabanken, deposited sediments ranging from fine-grained clay to large cobbles and boulders (till). Strong bottom currents have eroded, and still erode, the fine-grained sediments at the surface of this shallow bank (as shallow as 125 m depth), leaving behind a coarse-grained lag deposit (coarse sand,gravel and stones) (Figure 4). The ice has also deposited moraine ridges, which are arcuate features formed from till during the ice retreat. In the deeper area, the moraine ridges are often covered, or partly covered, by recent fine-grained sediments like mud and sand. But in the shallower areas, very little sedimentation covered the gravel and stones forming part of the ridges, giving good living conditions for species which need a hard substrate, e.g. coral reefs and sponges. 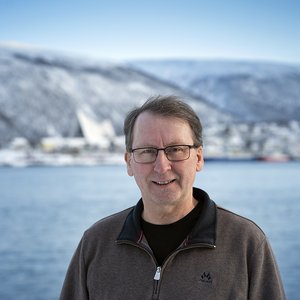