A number of different coral reefs have been discovered in waters off the Norwegian coast. The Røst Reef off Norway’s Lofoten Islands is the world's largest known Lophelia reef. That these corals almost encircle the entire North Atlantic is more unknown.

- In the North Atlantic, cold-water corals have been found at the edge of the continental slope surrounding all land bordering the open sea, says Lene Buhl-Mortensen, Senior Scientist at Norway’s Institute of Marine Research. In collaboration with scientists from IMR and Iceland, she has summarized results on the occurrence of the nine most common coral species in waters off Norway, Iceland, Canada, Greenland, Faroe Islands, the United Kingdom, Ireland, as well as on the Mid-Atlantic Ridge. For Norwegian waters, much of the supporting data has been provided through the MAREANO benthic mapping program.

A primary objective of this study was to investigate the extent to which temperatures and currents influence the distribution of corals in northern-Atlantic regions.

Buhl-Mortensen finds it particularly interesting that for most species studied, the occurrence of corals around the northern Atlantic region is virtually continuous.

Thus far, 26 different coral species have been discovered in Norwegian waters, including: soft corals, horn corals, and stony corals; if sea pens are included, the number increases to 39 different species. Most species occur on the continental shelf, but they also thrive in many coastal and fjord areas.

- Most of these species are also well established in waters outside Norway. This is possible because only small differences in temperature and seabed condition occur — at 300 to 500 meters depths — on the continental shelves and -slopes in the North Atlantic; this means that environment conditions have not been a factor inhibiting distribution of cold-water corals, says Buhl-Mortensen. 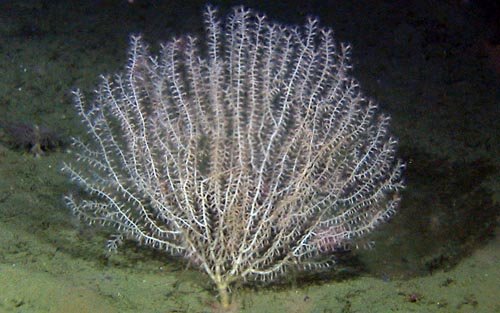 One of the most common species of cold-water corals is the stony coral, Lophelia pertusa, which constructs large reefs. Some places these occur so dense that they almost merge and they form reef complexes.

- It is called the “Røst Reef”, and extends about 35 kilometers in length, and is up to three kilometers in width, Buhl-Mortensen describes.

This massive structure is a coral complex because there is little space between individual reefs. In management context a coral complex is treated as a single coral reef with particularly high conservation value.

Other species, such as: red tree coral (Primnoa resedaeformis); bubblegum coral (Paragorgia arborea); and sea fan (Paramuricea placomus) do not form reefs, but often occur in relatively dense stands. Such areas are designated as coral gardens. 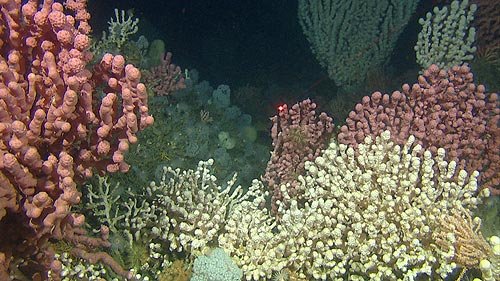 A major reason why some species do not occur throughout the entire North Atlantic is the relatively low temperature range in deep ocean basins and undersea ridges that limits transport of temperature-sensitive coral larvae through currents in the deepest areas.

- Lophelia reefs are also very common outside Norway and south of Iceland, but are with few exceptions absent outside Canada. Such differences are not the result of human activities, but rather due to local environmental conditions, says Buhl-Mortensen.

Coral eggs and larvae float freely in the water column for a period of time before they gravitate or swim towards the bottom and settle to begin their life as sessile filter feeding organisms. They are transported with the currents; their survival and ultimate success after they become benthic organisms depends on whether they end up in locations with: suitable bottom type; adequate food availability; and appropriate temperatures.