Cruise diary: During the past two weeks of the MAREANO expedition, several new coral reefs have been discovered. One of them is Pearl Chain Reef (Perlekjederevet) that was found west of the town Sandnessjøen, at a depth of approximately 290 meters. This is a narrow coral reef complex extending over a kilometer in length. 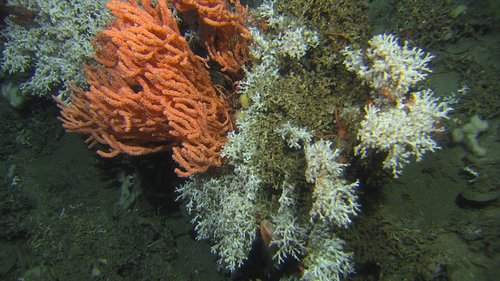 The Pearl Chain Reef house several different coral species. The white coral, Lophelia pertusa, is known for building large reefs in the deep ocean off the coast of Norway; it is also an important species at the newly discovered Pearl Chain Reef. The orange coral, Primnoa resedaeformis, is a deep-sea gorgonian octocoral (a "seafan"). Looking closely among the corals, both a squat lobster (Munida sp.) and the big bivalve Acesta excavata can be observed.

Many new coral reefs have been found during this cruise. At one location 24 reefs were filmed with a video camera during a single dive. These reefs are situated like a chain of pearls along iceberg plough marks — long trenches on the ocean floor dug out by icebergs at the end of the last glaciation — hence the name Pearl Chain Reef. This is something that we have not seen before; although, it is well documented that coral reefs often grow on the edges of such plough marks. 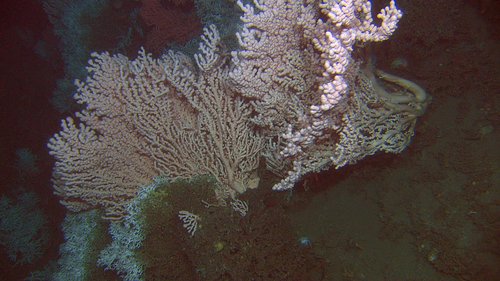 On detailed maps of the ocean floor it is possible to see how the reefs have started growth at the edges of the plough marks and then extend outward against the direction of prevailing currents. 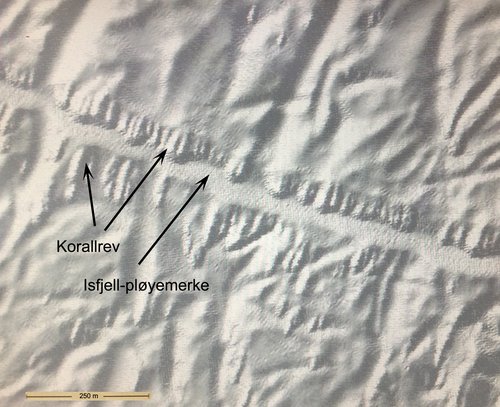 This section of a multi-beam bathymetry map illustrates how the coral reefs (Korallrev)grow at the edges of iceberg plough marks (Isfjell-pløyemerke). This map was made before the cruise and is part of the bathymetry maps serving as an important background for selecting locations for video investigation.

The bottom is steep in the front of the reefs, growing out towards the middle of the plough mark. Here, the coral reefs grow tall and extend horisontally out from the edge of the furrow. Living corals of such elongated reefs occur only the colonies in the front of the reef, exposed to the currents. The reef’s base consists of dead coral debris, similar to that occurring on the down-current reef “tail”. The corals were observed at approximately 290 meter depths; reefs were around 50-100 meters long and 10-30 meter wide. Based on age determinations for similar reefs at Træna, these new reefs are approximately 5,000 years old. Further studies of material collected at this site will be very useful to improve method for detecting such reefs, to understand how they have evolved, and to determine their importance to local ecosystems. 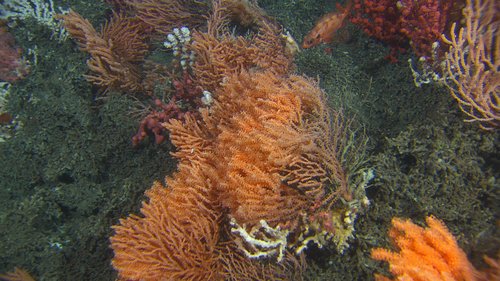 Redfish (Sebastes sp.) have been commonly observed at reefs studied off Norway.

Looking for pollution in the Norwegian Sea
The deep-sea seapen Umbellula: cheek to cheek in the deep sea
Cracks along the upper slope directly north of the Storegga Slide
Large areas of carbonate crust found at pockmarked seafloor off mid Norway
The seacrets of the shelf edge
MAREANO’s autumn cruise 2015

Looking for pollution in the Norwegian Sea

Cruise diary: The ongoing MAREANO cruise has finished surveying the shelf edge south of Skjoldryggen at the mid-Norwegian shelf, and is now concentrating on the shelf edge between Skjoldryggen and Trænadjupet. Sediment samples have been collected from ten locations, including five with multicorer.

The deep-sea seapen Umbellula: cheek to cheek in the deep sea

Cruise diary: One of the most spectacular creatures that we occasionally encounter down in the deep, cold ocean is the deep-sea seapen Umbellula encrinus. This spectacular organism, resembling a giant plant or exploding fireworks is in actual fact a colony of giant polyps, which are collected in a crown perched atop a stem, of sorts.

Cracks along the upper slope directly north of the Storegga Slide

Cruise diary: Between stations, the vessel G.O. Sars collects high resolution seismic data using a hull mounted acoustic source (TOPAS). In fine-grained sediments the sound may penetrate 100-150 m. The acoustic pattern gives an indication of the seafloor sediment type, but we also get information about the stratigraphy and geological development.