The 2015 multibeam ecchosounding measurements began in March along the transect Bjørnøyrenna – Kong Karls Land. Seven area-boxes with side lengths of 27 and 31 km have been established. Another bathymetric survey started May 6  off the coast of mid-Norway at an area West of Aktivneset and at Stadhavet (see figure below). 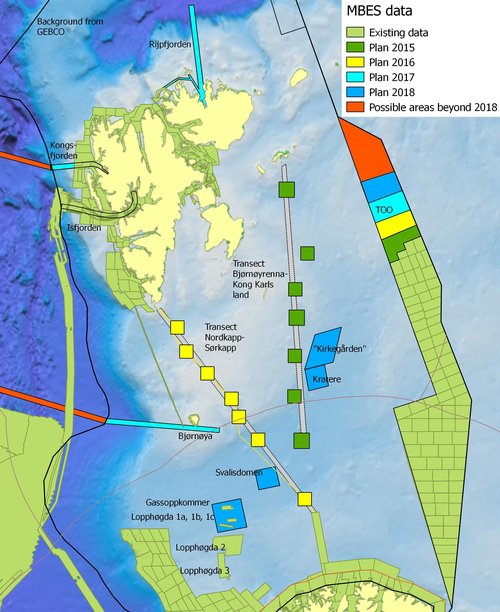 The first MAREANO cruise in 2015 is scheduled to take place in the period June 5–18 during which biological, geological and chemical sampling will continue towards north along the Norwegian-Russian shelf-border where the sampling left off last year (see figure). The sampling in 2015 is planned to end up close to 74 degrees north.

A second sampling cruise will be undertaken in the period August 18 – September 8. This time sampling will be carried out at the shelf slope north and south of the Skjoldryggen area, mid-Norway, and at a remaining corridor close to the edge of the continental shelf at the Storegga area, just south of Skjoldryggen. 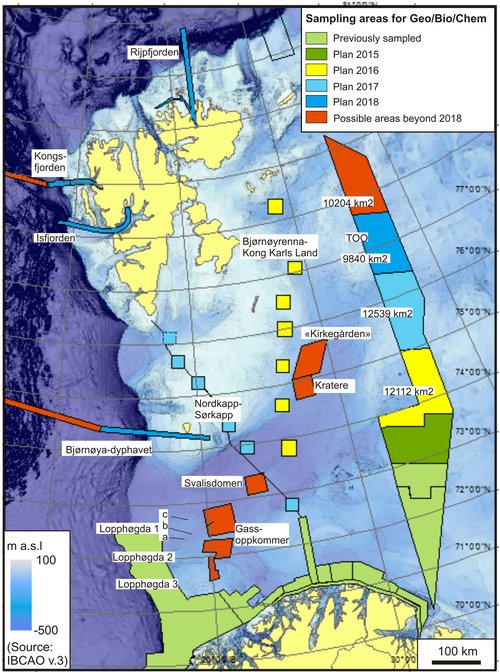 Geological, biological and chemical sampling carried out in 2014 (dark green) and areas to be sampled in 2015 (yellow). Suggested areas for 2016-2017 are included in the map (light and dark blue, respectively.