Cruise diary: Now we are well underway with visual inspection and sampling of the seabed at this year’s first MAREANO cruise.

While sending the video-platform Chimaera towards the bottom of the Barents Sea (250–300 m), we see a large amount of particles swirling through the water like snow. The large particles are observed from tenfold of meters above the seabed and down to the seafloor. Yesterday we had to stop the video recording at a station due to the high particle load in the water and a thick jelly-like layer on the bottom that made it impossible to observe the seabed. We have tried to detect the material through high frequency sonar aboard G.O. Sars without seeing any sign of the particle layer. 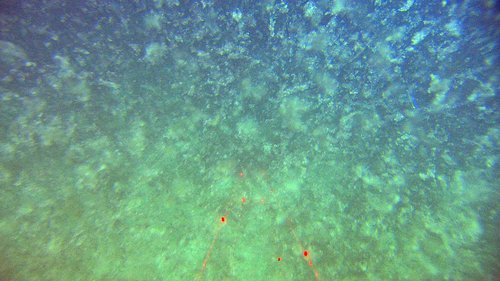 This is a marine snow-storm with large "snowflakes" consisting of fallout from the productive layer higher up in the water column.

A massive sinking of gelatinous colonies of the plankton algae Phaeocystis pouchetii has been previously observed at 100 meters depth in the same area that is presently mapped by MAREANO (Wassmann et al. 1990: Mass sedimentation of Phaeocystis pouchetii in the Barents Sea). The amount of organic particles that was sinking was at that time viewed as uniquely large compared to other areas in North Atlantic waters. This particle rain is caused by a large plant production in the upper water layers that the grazing zooplankton fails to control.

Phaeocystis pouchetii produces mucus which is rich in organic matter, and what we see as "snow" in the water and slime on the seabed is most likely part of the same phenomenon reported by Wassman et al. from the water column in the same area of the Barents Sea.

The gelatinous colonies attract bacteria and particles in the water and form larger aggregates that eventually land on the seafloor. This is probably the first time that the effect and extent of these blooms on the seabed have been documented while the fallout progresses. 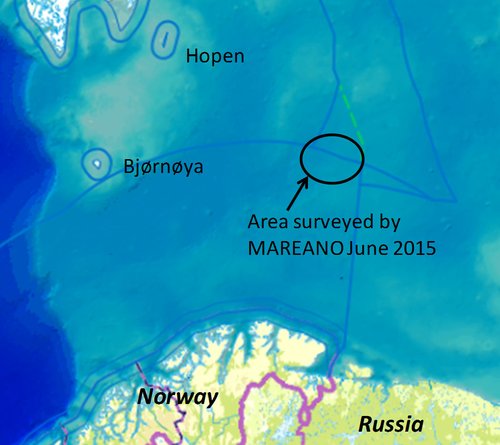 We are mapping close to the polar front in the Barents Sea in an area where plankton production is very high.

In northern waters, a short warm season gives rise to strong algal blooms in early summer (May/June). The blooming is more intense in the Arctic than in warmer regions, partly due to a large supply of light that allows for algae production a major part of the day.

The high micro-algae production leads to a large fallout of organic material to the seabed from the primary production in the surface layers. This huge particle load of organic residues looks like a snowfall and is often called "marine snow".

When plants and animals near the surface die, the organic residues sinks to the seabed in the same way as leaves falling from the trees in the autumn and lands on the ground. Marine snow contains the dead plants and animals, wastes from animals and some inorganic material. Depending on depth, it may take weeks before the "snow" reaches the seabed. This regular rain of marine snow nourishes many deep sea areas. According to scientists that have analyzed the content of these particles they seem to be highly nutritious. 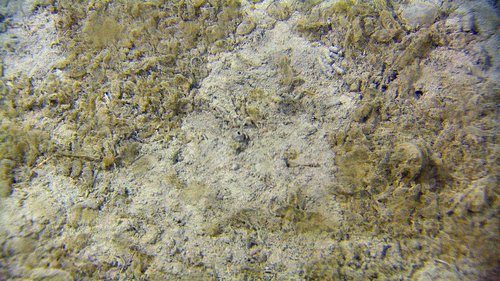 At some locations the bottom is covered by a brown-yellow material which presumably serves as a rich food supply for many benthic organisms.

The sticky mucus produced by plankton that glue algae, feaces, and other organic matter into aggregates fall towards the seabed as marine snow. At the bottom the particles form a slimy layer. We have observed large amounts of this mucus on most of the stations visited and it has been called "marine snott" which is fitting very well with our observations.

This is a good example of how the energy produced in the upper water layers profoundly supports benthic fauna. However, it cannot be neglected that the large amounts of gelatinous matter also may represent a threat to bottom fauna by burying them or through clogging of their respiratory and/or filtering organs. 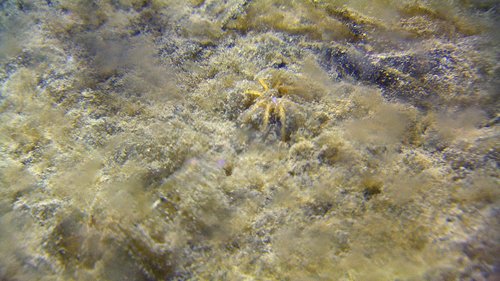 A sea spider struggling to get ahead in the gelatinous fallout from algal bloom.

The production is very high in the Barents Sea, presumably leading to the great pelagic fish stocks. Active trawl fisheries take place around G.O. Sars, which at some sampling stations result in very poor visibility due to resuspension of bottom sediment. We have observed many and very deep trawl tracks in the area. 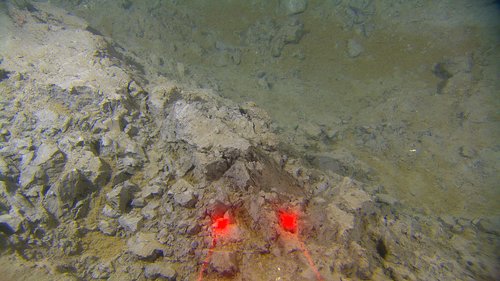 Traces of trawling is common and upheaval will probably stick around long after trawling. The red dots are laser light indicating 10 cm scale between them.